To the editors of PopSci, the presidential BlackBerry question is a no-brainer. Hell yes, he should have one. 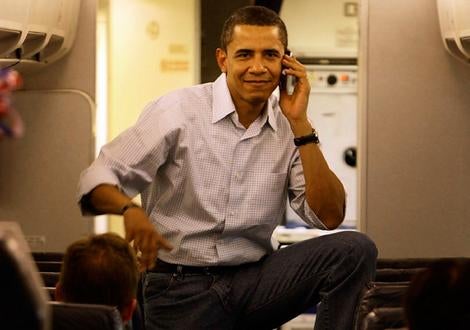 President-elect Barack Obama speaks on his BlackBerry on his campaign plane earlier this year. AFP
SHARE

Amidst this week’s CES buzz, there’s one political question that keeps popping up on show-goers’ lips: “Why should Obama have to give up his Blackberry?”

The president-elect will soon become the most tech-savvy commander-in-chief in American history, and the digital communication landscape has changed radically since Bush first entered the White House in 2000. Today, it’s almost unthinkable that any chief executive, corporate or political, should be required to use less technology than he or she did prior to taking office.

The main argument for asking Obama to relinquish his BlackBerry is that there are security risks associated with email, particularly when it’s delivered to a mobile device. There’s the concern that his email could be hacked and sensitive communications could get into the hands of terrorists. Or that personal emails could be, in the words of George H.W. Bush, “looked at by those out to embarrass.”

But all BlackBerry data delivered through an Enterprise email system is encrypted via the Triple Data Encryption Standard and never decrypted outside corporate (or governmental) firewalls. This means hackers would intercept only a meaningless string of code if they attempted to access the president’s BlackBerry email.

And the Bush concern? About embarrassing personal emails? Well, if the leader of the free world hasn’t yet learned how to digitally censor himself, we’re in big trouble. The argument seems specious in any case, since all written presidential communications—whether scribbled on a piece of paper or thumbed out hastily on a smartphone—are subject to public record.

Finally, there’s the concern that BlackBerry’s GPS technology would give evildoers dangerously accurate information about the exact whereabouts of the president. But this argument seems strange, too. Are the president’s whereabouts really so secret? The man travels with a motorcade. Couldn’t an evildoer get the same information from the coordinates of cellphones belonging to, say, Obama’s top aides, Michelle, and members of his Secret Service detail?

A final decision on the presidential BlackBerry is still forthcoming, but we at PopSci are rooting for a yes. On a recent episode of the “Today” show, Obama was asked whether his security advisers would be likely to let him keep his favorite gadget.”I’m still in a scuffle around that,” he said. “How do you stay in touch with the flow of everyday life?”