Four new mini beamers, including one inside a phone 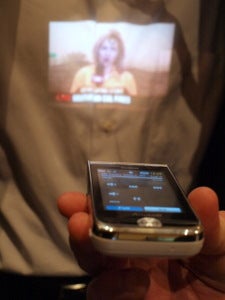 Samsung's W7900 phone has an OLED display and a mini projector that turns anything (or anyone) into a second, larger screen. Sean Captain
SHARE

For years, pocket-sized projectors were talked about but not seen—like a mythical or at least very rare, endangered species. Now, it seems, they are multiplying like rabbits.

One reason is the relatively easy formula for making one. Aside from 3M’s model, most picos use the same DLP projection system from Texas Instruments—using a 0.17-inch-diagonal chip to project low-res images up to 50 inches wide (in a dark room). Optoma was the first to use the technology back in the fall. This week we saw new variants from Toshiba and toymaker Wowwee and two enticing versions from Samsung.

The first Samsung model, the MBP200, is a portable media player that gives you the option of viewing either its LCD screen or sending output to the integrated projector. In addition to videos and photos, its built-in software allows it to show PDF, PowerPoint, Word and Excel files. The player is due to hit the US market by the end of the year, at an unknown price.

The holy grail product, though, is Samsung’s W7900—the first cellphone with an integrated projector. It’s not exactly iPhone thin. At over an inch thick, the size is closer to a 7-year-old Nokia. But the phone packs a lot into its girth. In addition to the projector, it features a colorful OLED screen. The W7900 may be available to lucky Koreans within a week or two. No word on when (or if) we’ll get to buy them stateside.