The Future of Green Electronics 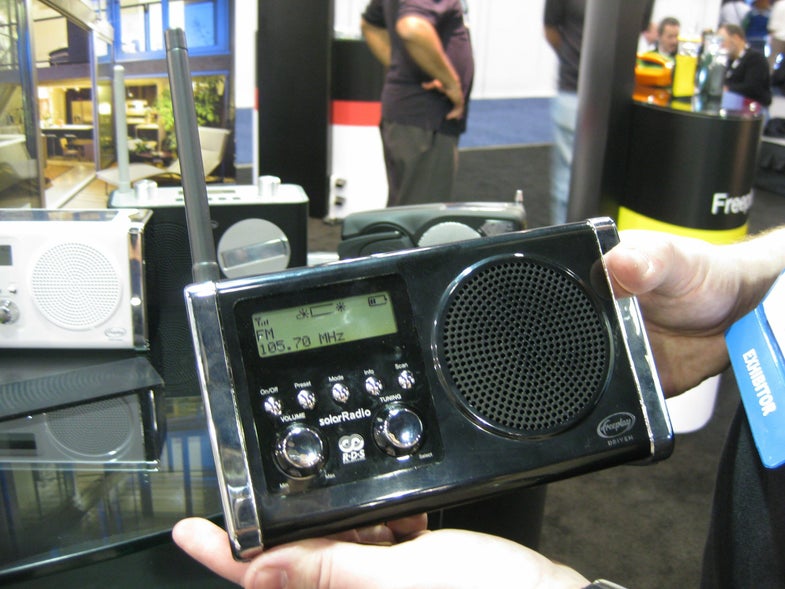 Freeplay Energy’s new digital radio has looks inspired by modern design—and electronics inspired by rural Africa. The radio, for sale in Britain, uses low-power tech similar to that in the company’s wind-up radios for developing countries. That means it uses 10 times less electricity than an ordinary digital radio, so it can run entirely off a solar panel on its cover. And according to panelists at today’s CES session on “Greener Gadgets,” it’s an example of a how products designed for places with little electricity—products that have to be energy-efficient if they’re going to work at all—can lead to more eco-friendly gadgets for everyone.

Another good example is technology derived from the One Laptop Per Child project. John Ryan, vice president of Pixel Qi, a company that’s commercializing the non-profit OLPC’s tech, said that he’s working with chip manufacturers to help reduce the power that a computer’s processor consumes. OLPC’s XO laptop cleverly shuts off the processor when it’s not being used, saving tons of power. Soon chip makers may build this capability right into processors, extending the battery life of ordinary laptops everywhere.

The XO may also spawn new screens for consumer laptops. The XO’s display uses less power because it can reflect surrounding light instead of always needing a bright bulb behind it; Ryan says that upcoming versions of this tech will cut a screen’s power consumption by 80 percent. Between better screens and better processors, the laptops of a few years from now could use 10 or 20 times less power than they do today, says Ryan.

As an interesting side note, lower-power gadgets might automatically lead to gadgets that use fewer toxic materials. Ryan said that many of the most hazardous materials, such as cadmium and mercury, are needed mainly to deal with the large amounts of power that pass through modern electronics. Slash the power, and you can switch to simpler, greener materials, for a double helping of environmental benefits.