A promising new piece of software beams your computer to the big screen in seconds, no cables necessary 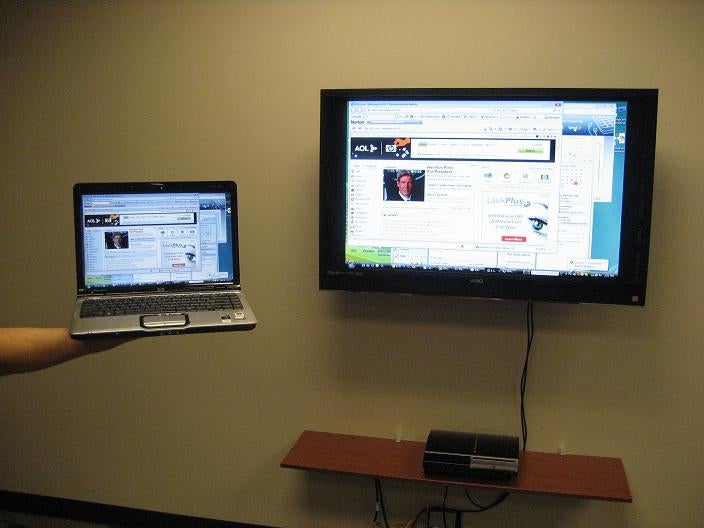 Someday soon there’ll be a chicken in every pot and a centralized media center in every home. Till then, we’re stuck with what we’ve got; some companies are rising to the challenge. Golden Signals, which debuted DisplayShare this week, is one of the more innovative: its wireless TV-computer linkup utilizes your existing gaming console and router.

Install the $50 software and your computer begins creating a realtime video of every action occurring on the desktop. By simultaneously commanding the console (currently only Playstation 3, but a version that works with the Wii and Xbox 360 is expected by summer) to stream the video on TV, DisplayShare allows you to view anything you’d see on your computer on the big screen.

The system works by tapping into your existing network protocol so there are few distance limitations. If you have a powerful router your laptop could be anywhere in the house. With a lesser one, you can still probably park it about 50 feet away, according to Stuart Golden, President and CEO of the startup. What this spells for the user is a seamless way to free up media. Hulu becomes a (even more) viable alternative to cable. Pandora gets easier. YouTube is liberated. It won’t work with Blu-ray for copy protection reasons, but that seems a scant constraint. A simple, clever system that, at least in demo form works exactly as promised. Now if you’ll pardon me, I have to return to the floor to search out a poultry-pot workaround.