Gefen beams up to 1080p video across a room 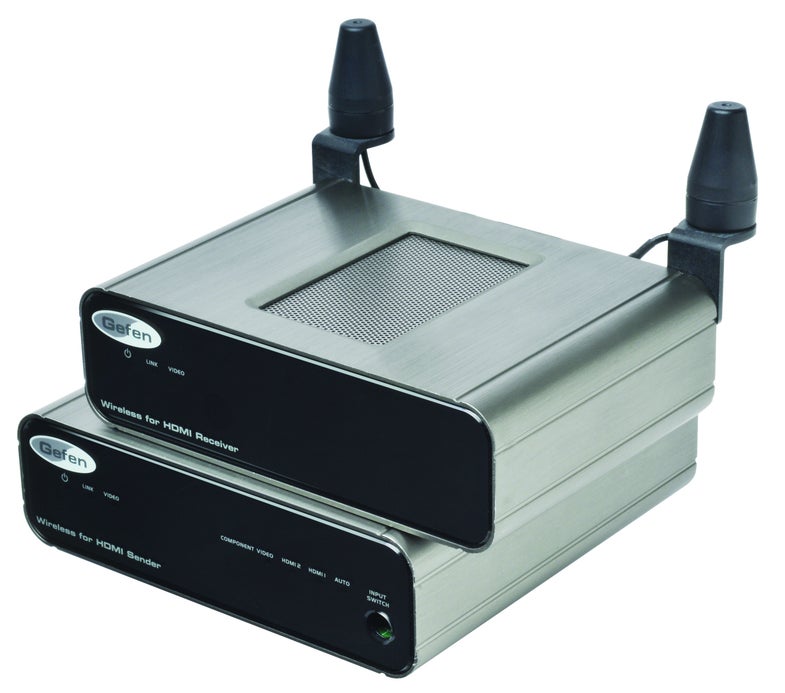 Like perfect cellphone reception, wireless HDMI is a radio technology that’s long been promised and has shown little sign of materializing. But finally, it’s here. Gefen’s HDMI UWB Extender is not the first high-def A/V streamer to hit the US. (Sony’s Bravia Wireless Link has that distinction). But it’s the first that can fully replace an HDMI cable by offering up to 1080 progressive HD video.

“Finally” is certainly the word for this product. Gefen announced it nearly two years ago and promised delivery in Autumn 2007. But it was worth the wait.

Better than Promised
Per Gefen’s list of preconditions in the product literature, I set up the system in a single room, with about a 30-foot gap between transmitter and receiver (the max they guarantee). And I left a clear line of site between them. Gefen is cautious in its claims because of an in inherent weakness in the ultra-wideband (UWB) technology the HDMI UWB Extender uses. UWB is great for transmitting large amounts of data because it utilizes a broad swath of frequencies. But to keep these data bursts from interfering with neighboring networks on the same frequencies, its power and range are kept very low.

I got virtually perfect reception both in an office conference room and in my living room (with the receiver sitting right next to a Wi-Fi router). The Extender worked not only when I followed Gefen’s guidelines but also while I broke all the rules, even standing in front of both the transmitter and receiver and even putting the transmitter in another room, behind a steel door. (In fact, only wrapping my hand fully around the antenna killed the transmission.) Most important, I had no problem when I stashed the receiver behind an LCD TV. After all, what’s the benefit of eliminating the unsightly cable if you can’t also hide its unsightly wireless replacement?

Hi-def streams from a Blu-ray player and an AppleTV looked perfect—without any fuzziness or stuttering. Colors were spot-on, and audio was crisp. To really test quality, I also hooked up a Sencore VP401 signal generator – which TV pros use to diagnose problems with sets. The Sencore produces pristine test patterns such as color bars, brightness gradients (from black to full white) and fine-grained patterns that will break up conspicuously if there is the slightest glitch in reception.

Though connecting the Extender to the Sencore didn’t produce quite the same quality as an actual cable connection, I had to look closely to see the difference. For example, I noticed very slight ghosting (double images) where two color bars met, and a bit of shimmering on a screen jam-packed with fine text. (By comparison, Sony’s Bravia Wireless Link crashed while trying to display some of the more-intricate patterns.) It’s very doubtful that any of these weaknesses would produce perceptible errors when real video is playing. I certainly didn’t see anything with my HD test material. Gefen says that they have made some firmware improvements that may fix even the miniscule problems I saw.

My one complaint is noise. Both the transmitter and receiver have cooling fans that give off a perceptible whooshing sound. Crank up the volume even moderately, though, and the sound is drowned out.

Who Cares?
Now that we know the Extender works, we have to ask an important question: Does it matter? The kit sells for a whopping $999. Meanwhile, you can buy a high-quality 30-foot HDMI cable for about $40 online.

(Never buy one in a store like Best Buy. The markup is huge.) The cable might not be pretty – especially if, say, you are running it up to a ceiling-mounted projector. But the $959 you save should be more than enough to hire a contractor to hide it behind the wall. (The $40 cable I mentioned is CL2 rated for in-wall installation.) Or you can try Flatwire’s upcoming tape-like HDMI cable that you stick to the wall and then cover with spackle and paint.

Of course Gefen’s provides more flexibility. You can re-arrange the furniture without having to re-route cables. And you can use it in places where tearing into walls isn’t an option—such as a rental apartment. It’s also handy for temporary setups, such as in conference rooms.

And as wireless HDMI offerings (and competition) grow, prices will inevitably drop. We expect to see at least a few products from mainstream companies at the Consumer Electronics Show this week. They will likely use yet another radio technology called WirelessHD. Stay tuned.