Two in the Hand

A face-off between the first micro video projectors 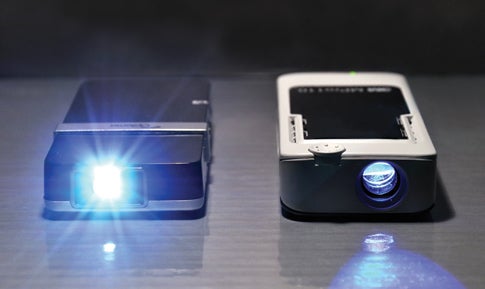 Having watched the slow development of pocket projectors for years, I’m thrilled to have not one but two real-life models to play with. 3M’s MPro110 ($360) debuted in September and earned a grand award in our Best of What’s New roster for 2008. This week, Optoma will start selling the first competing product, its Pico PK-101 projector, for $400.

In two or three years, we’ll probably look back at these first contenders with the same nostalgic chuckle that we reserve for 56K modems or the brick-like first-gen iPod. But now is the time of wonderment at the birth of a fun new product category. Each of these projectors delivers the wow factor, and they are equally good performers, although in different ways.

3M’s model, with its utilitarian, pale-gray plastic case, looks like a 1970s prototype rather than a 21st-century shipping product. You won’t get many style points for carrying it around. But one of those utilitarian features, a VGA adapter for laptops, makes it the natural choice for a lot of customers–and not just people who can only speak in PowerPoint. The laptop link would be equally handy for showing DVDs or Hulu broadcasts, for example. The big, ugly focusing knob up front also provides an advantage: It’s easy to grip for making fine adjustments. (The Pico’s elegantly recessed focus dial is hard to get at.)

Optoma’s Pico wins the beauty contest. In fact, there is no contest. The sleek, black-metal case with silver trim looks like it came, if not from the future, then at least from the present. At 2 x 4.1 x 0.7 inches, it’s 30 percent smaller than the already tiny 3M model, and at 4 ounces, it’s 1.6 ounces lighter. Yet that tighter package makes room for a handy extra feature: a little half-watt speaker. Though feeble, at least it takes the Pico beyond the days of silent movies. (The best plan with either projector is to plug headphones or speakers into the video source, such as an iPhone.) But Optoma doesn’t include a VGA port. The only input (also present on the 3M) is a composite video plug for devices like cameras, camcorders and iPods or iPhones (an adapter for Apple’s handhelds is included). It’s useless with most laptops: Only a handful have composite or S-Video ports.

Performance-wise, the battle is a draw. 3M has higher resolution. Its 640-by-480 projection matches standard-def TV and is twice as high as the Optoma’s 480-by-320. But the difference isn’t so dramatic when you’re projecting either a little 8-inch image right in front of you or a 50-inch image on a wall five feet away.

In the ultimate overkill, I used as my source the one video device I had at the office: an LG BD300 Blu-ray player loaded with the Ironman disc. After squeezing that 1080p, HD-color feed out the composite port and into the mini projectors, I saw slightly richer color on from the Optoma–for example, in the gold of Tony Stark’s metal suit, which looked more like platinum with the 3M.

That wasn’t surprising. The Pico, as the first pocket-sized DLP projector, makes images by mixing rapid flashes from red, green and blue LEDs. 3M uses a single white LED that starts out with a lesser color gamut and picks up weaker colors from RGB filters on its LCoS image chip. The quality differences are minor though.

Optoma’s image quality drops quite a bit when you shift it from the 11-lumen regular mode to the 6.5-lumen power-save option. Lots of details, sometimes even faces, disappear into the shadows. But that does extend battery life from one hour to almost two. The 3M has a single, bright playback mode that the battery can power for about an hour.

With higher resolution, more inputs and a lower price, the 3M Mpro110 is a slightly better deal. But the Pico has a small advantage in color and portability. Ultimately, it’s a thrill to see big, color images popping from your hand using either device.