Our shutterbug pits the Canon 50D against Nikon's D90 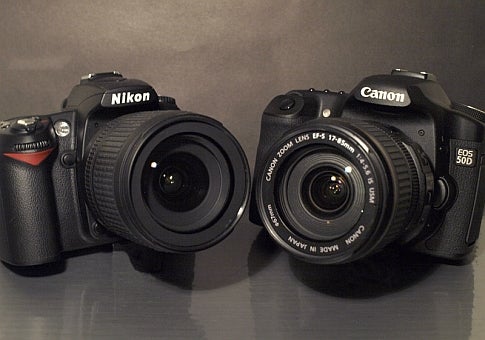 Prosumer, enthusiast, advanced amateur. Whatever you call it, there is a class of photographers who are not pros but are serious about picture taking — committed enough to spend a grand or more on an SLR body and at least several hundred dollars more on lenses. Those shutterbugs recently got two new choices from the big guns of digital photography. In September, Nikon released its veeeeerrrry long-anticipated D90 (a winner in our latest Best of What’s New honors). In August, Canon released the entirely expected but very welcome 50D. Technically, these cameras are not direct competitors. The Canon has a magnesium-alloy body, esoteric adjustments such as vignette correction, and a higher price tag (about $1,200 online); the Nikon is around $900. But after lugging each of them around for the past several weeks, I think they’re quite comparable. So the question is, which one should you get?

If you’re this serious about photography, quality is mainly what you care about.

Ultimately, I like the Nikon D90 better. Colors–especially reds–are more saturated. And the exposure is more reliable and consistent. Perhaps I lean towards the D90 because I’m not a pro: I’m less likely to take a horrible picture with this camera.

That’s especially true if you are shooting photos as compressed JPEGs, like most amateurs do, because you don’t have as much control over how the images are refined and little wiggle room to fix mistakes. The other option, called RAW, is to record the unprocessed data from the sensor as massive files that you refine by hand on a PC. The big advantage here is that you can “re-shoot” a photo, changing settings like the white balance after the fact. To evaluate both types of photos, I set each camera to record both a JPEG and RAW version of the test photos I took.

Shooting both outdoors and inside, in a variety of lighting conditions, the D90’s JPEG files consistently beat the Canon’s. Specifically, the Nikon prevailed in 10 of 14 tests.

Exposure was the biggest differentiator. Set to matrix metering, the Nikon never let a portion of the photo get “blown-out” bright, even in tricky conditions like photographing a bright sky over a shady street, or a building that was half in direct sunlight and half in shadow. Set to evaluative metering (the equivalent setting) the Canon 50D often overexposed, turning a pale-blue sky nearly white.

Nikon images also benefit from the company’s amazing D-Lighting feature (which I first described in a review of the D700 professional camera). D-Lighting compensates for the inherent weakness of all digital (and for that matter, film-based) cameras: They can’t capture a wide dynamic range. The difference between light and dark is far narrower in a photo than in our eyes. D-lighting helps fix this by automatically brightening the dark parts of photos. Black remains black. But those murky dark-gray areas lighten up enough so that you can see the details lurking in the shadows. Of course, you can play with this in any photo editor. But if you brighten JPEGs more than a tad, you’ll start getting a grainy effect because there just isn’t enough data to create a sharp image. Nikons apply D-Lighting to the far more abundant RAW data before spitting out JPEGs.

Now, if you “shoot RAW” with the Canon, you have a lot more information to work with. And in tweaking the RAW files, I was able to recover a lot of detail in both the dark and light parts of the photo. But it’s still easier to have the camera do the work for you. And D-Lighting is merely an option. You can turn it off completely or select from four levels of correction. And if you shoot RAW photos on the D90, you can change these setting after the fact.

The differences in color were subtler. But my preference is for the Nikon’s fully saturated greens and reds. With the 50D, even objects that are deep red in real life have an orangey tint in the photos. And deep greens, like those in plants, take on a hint of yellow. Adjusting the colors in RAW didn’t help. Boosting the red or the green might have improved those colors, but it added an odd tint to anything that was white.

Changing the white balance didn’t help, either. As with the Nikon, I shot most photos in auto white balance. But I tried all other settings on the RAW files (which is the same as if I had shot the photos at all settings) and was unable to get a truer color balance.

This wasn’t much of a surprise. Canon SLR’s have had that orangey “warm” glow for years. It’s often a nice effect. In portraits, for example, people with very pale skin look like they’ve gotten a little sun. And even pictures shot by the bluish tint of noonday sun get a bit of that “golden hour” glow that you typically see around sunrise or sunset. But you can easily tweak colors on your computer. I prefer starting with the more accurate images from the D90.

Canon retains its signature strength in one area: low-light shooting. Pixel noise is virtually nonexistent up to an astonishing ISO 3200 sensitivity setting. Nikon has come a long way since its grainy days of just a few years ago. By switching from the CCD image sensor in the D80 to the CMOS chip in the D90 (the same technology that Canon’s been using for years) Nikon produces far crisper photos. But images viewed at full-size still have a slight speckly look even as low as ISO 800 sensitivity.

Canon hasn’t just stayed the course, though. While its photos were always smoother than Nikon’s, it cameras often had a problem with color noise — errant specks of blue, green, yellow, or (especially) magenta creeping into items that, in real life, do not contain those colors at all. Color noise essentially disappears up to ISO 3200 on the D50.

Overall, I’d say that people who photograph mainly at night would probably get better results from the Canon D50. Check these photos from election day (shot in RAW and lightly edited) for examples. But I’ve also gotten great nighttime results with the D90, as you can see in these unedited JPEGs of East River bridges and of circus performers at the Spiegeltent on the Manhattan waterfront.

Giving the Canon 50D a fair review was challenging because of the absolutely crappy lens it came with. The EFS 17-85mm lens Canon sent has an image stabilizer, which is nice. But it also produced rather soft (aka, slightly blurry) images and absurd amounts of color fringing–a refraction artifact, common in cheap lenses–that puts a purple, blue or green outline around any border where light and dark items meet, such as tree branches against a bright sky.

Unlike many entry-level SLRs, the 50D does not come from Canon with an official “kit” lens, although some online vendors toss in the 28-135mm lens (which I haven’t tested) for around $1,400. Nikon, however does offer a kit option for the D90. You can buy the camera either by itself for around $900 or with the Nikor 18-55mm image-stabilizing lens for about $1,200. Not only does the Nikor have substantially more zoom range, it also delivers far-crisper photos, without a hint of color fringing. And $300 is a bargain for this lens. By comparison, Canon’s crummy 17-85mm lens sells for between $350 and $600 online.

The Canon D50 feels very serious. Its magnesium-alloy body seems sturdy enough to hammer nails with. The right-hand grip is meaty, and it practically sticks to your hand, thanks to the supple rubberized grip that wraps from the front to the back of the camera. While I was toting this around on election night, several people stopped to ask me “Who are you with?” They were all surprised when I said that I wasn’t a photojournalist, just a guy with a camera.

The 50D’s interface took some getting used to but eventually won my heart. Knobs and buttons are basically unchanged since earlier versions. Chief controls are a small jog-wheel at top right, just behind the shutter-release button, a giant scroll wheel on the back for your thumb, and a tiny joystick to the right of the gorgeous three-inch LCD screen.

What’s different is the screen. Tap the select button in the center of the scroll wheel, and you get a slickly animated settings screen that you navigate with the joystick to select and adjust virtually every setting, such as ISO, exposure compensation, flash intensity, and light metering mode. At first, this had a point-and-shoot look that made the camera look less serious. But I quickly found it to be very handy. As in the past, you can also make adjustments using a monochrome LCD screen on the top of the camera, but some settings proved to be an ergonomic nightmare. To set ISO, for example, you have to hold down a button about a quarter-inch behind the top jog-wheel and then turn that wheel — which requires either a carpal-tunnel-inducing contortion of the right hand, or bringing over your left hand and dangerously loosening your grip on the whole camera.

The D90’s controls are more old-school. You can hit the “menu” button and scroll though the prettily illustrated options on its own handsome three-inch screen. But you can also make nearly every key adjustment by turning either the scroll wheel on the top front with your right index finger or one on the top-rear with your thumb. Some tweaks require also pushing a button, but never in a way that will cramp your hand. With my analog sensibilities, I prefer the Nikon interface, but this is purely a matter of personal taste.

The D90’s body isn’t going to impress as many onlookers, however. The sturdy black plastic case screams “consumer model,” and the handgrips, though textured, are almost slippery. No one mistook me for an AP photographer. On the upside, though, the D90 is a bit lighter (with a body weighing 22 ounces to the Canon’s 26 ounces) and it’s about a half-inch narrower than the 50D.

Since both of these SLRs ultimately are consumer cameras, it’s not so bad that the D90 looks the part. But it is fun to play grown-up with the 50D.

That Other Feature: Video

There is that one special detail about the D90: the ability to shoot video (which just earned it a Best of What’s New designation). Both cameras have a live view mode, in which they raise the mirror, open the shutter, and provide a live video preview on the LCD. But only the D90 can record that video (for up to about four minutes). The 720p high-def footage is reasonably sharp, and Nikon’s excellent light metering helps the camera quickly adjust as you move it around, so you don’t end up with too many dark or overbright frames as the lighting changes.

Having to focus manually is annoying, especially because it’s awkward to do when you are using an SLR as a video camera (which is already less than ergonomic). But even the autofocus on real video cameras is a bit sluggish. If you practice enough with the D90, you may get no more — and perhaps even fewer — blurred frames than you would with a “real” camcorder. My take: The D90 is a still camera, but it lets you add a few videos to complement your photos, as I did during my shoot at the Spiegeltent.

In case it wasn’t already clear, my overall preference is for the Nikon D90. The Canon D50 is no slouch, and it performs better in some conditions, such as low light. And I’ve gotten some great photos with it. But the Nikon ultimately makes it easier to take good pictures, and does so at a lower price. For an underpaid photo hack like me, that’s a winning combination.