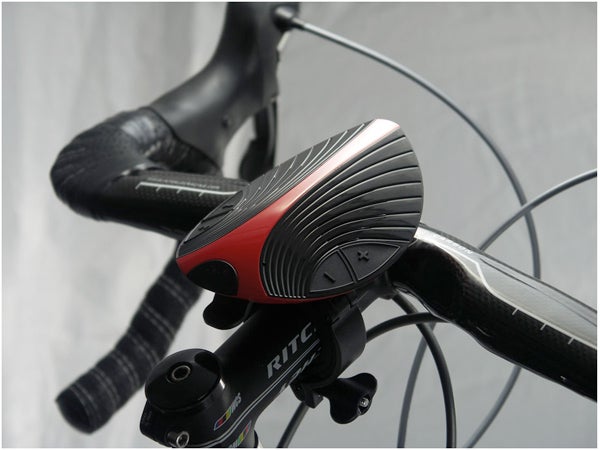 Blasting some music while riding a bike isn’t a terribly exciting or technologically novel concept. In the mid 80’s grown men would hoist a boombox pumping Run-D.M.C with one arm while controlling their beach cruiser with the other. The Cy-Fi wireless speaker ($199.95) is a long overdue evolution in cycle speakers and it’s a bit easier on the back. While it offers no singular technology worth noting, the finished product is as simple as it should be, a feat rare in modern electronics. We tested the iPod speaker (there’s a Bluetooth model as well) on the local boardwalk in San Francisco. Run-D.M.C was replaced by The Killers but the gawking from innocent bystanders attempting to enjoy their sunset remained.

Open the box for the Cy-Fi and you’ll be surprised at what’s missing. There’s no CD with an online manual or synchronization software. There’s no USB chord or instructions in seven languages. There’s only a wall charger, two mounting clips, the transmitter and the speaker itself. Stick the transmitter into the bottom of your iPod press play and voilá; anyone with 20 yards is listening to your playlist. Even the mounting clip is simple and adjustable to various handlebars. The clip remains on the bike for future usage while the speaker clips easily on and off. The transmitter only adds an inch of length and the iPod can be stuffed in your pocket or, in my case, in the front basket of the attractive blond riding alongside on her own beach cruiser. The speaker itself has buttons for adjusting the volume, play/pause and skipping tracks. Our lone complaint was the buttons were a bit tough to push while controlling a bike and weaving through tourists.

The sound was impressive and clear for me and the blonde. According to the Web site the system uses Kleer technology to transmit the sound with low power consumption and 100 percent lossless sound. The transmitter claims a range of 30 feet, which seemed consistent with our trial. The rechargeable battery lasts six hours; adequate, unless you’re training for next year’s Tour. Apparently you can even have four speakers pumping from the same iPod at once should the need arise. The product is Apple Certified and available online. So get one of your own, dust of the beach cruiser and leave the boombox in the garage.