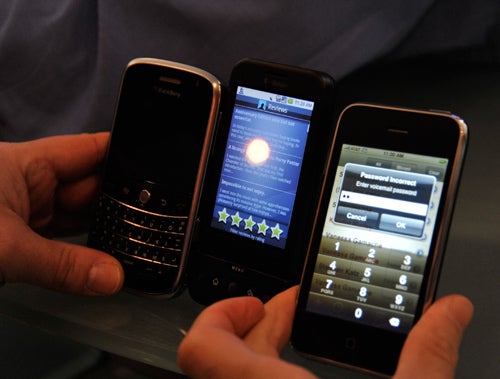 The G1 flanked by the Blackberry Bold smartphone on left and the Apple iPhone 3G on right. Sean Captain
SHARE

Straight away, let me say: I am NOT an unquestioning fan of the iPhone—I have often come close to throwing my buggy iPhone 3G out windows when it locks up and crashes. But the idea of the iPhone is so compelling; it’s hard not to judge other phones by that standard—especially when they seem to be aping the design. So how does the G1 do?

My grope time was limited, but I still found a few things to like. Google has gone one step beyond Apple with a unique way to zoom in on Web pages. You can’t spread your fingers open as on the iPhone (multi-touch). But you can drag around a square that magnifies a portion of the screen large enough for you to see what’s there. Let go, and the section of the Web page in the square expands to fill the screen. It’s potentially quicker than the zoom-in-zoom-out-drag-around shuffle on the iPhone.

Other nice features include one-click MP3 downloads from Amazon.com (and support for all music format), presence detection to indicate who in your phone book is online (as in last year’s Helio Ocean), and international compatibility (two bands of 3G coverage and quad-band basic access).

Pricing is also nice. The G1 hardware cost is a tad cheaper than the iPhone: $179 vs. $199. And T-Mobile doesn’t rip you off quite as badly on monthly charges as AT&T does. For $25, you get unlimited data, including unlimited Gmail messages (with push email. You must sign up for Gmail to activate the phone.) You also get 400 text or multimedia messages. This is a better deal than AT&T’s 200 text messages for $30 (and no MMS, since the iPhone can’t do it). The rub: If you use POP3 (non Web-based) email, those messages count against your allotment of 400. So you may do best with the $35 totally unlimited plan.

On the topic of e-mail, there is also no support for corporate Exchange accounts. But there is nothing stopping a developer from writing such an app, Android lead developer Andy Rubin reminded the crowd at the launch event. In fact, that was the answer to many questions, such as, “Can I synch the phone’s content with my PC.”

We don’t have it, but someone might build it.

That could be a great solution, or it could be a cop-out. It depends on whether developers decide it’s worth their while to write for this platform.

Then there are a lot of things the phone isn’t supposed to do. It can’t function as a “tethered” modem to provide Internet access to a laptop. And the phone is “SIM-locked” to T-Mobile. But with an open-source operating system, could someone hack it as they regularly do with the iPhone. “We’ve seen a lot happen in the past year with the device you mentioned,” said Cole Brodman, T-Mobile’s CTO.

So how’s the phone itself? I heard someone mention the word “Soviet” to describe its build quality. That may be a little harsh, but my impression, and the consensus among people at the launch event, is that it’s a blah, cheap-feeling device. A thick, lightweight slab of plastic with an inexplicable bend at the bottom that I guess is supposed to be a fashion statement. The LCD screen is basic. And because it is resistance instead of capacitance based (as on the iPhone), you have to rub your finger, rather than slide it. One nice feature that will appeal to iPhone users who curse whenever they have to enter text, the G1’s screen slides up (when in the landscape orientation) to reveal a full keyboard with real, tactile keys. That makes the device thicker, but also a lot handier for hard-core messagers. (I also heard someone use the term “Sidekick 4” to describe the device.

All these first impressions are horribly cursory, though. I look forward to spending some serious hands-on time with the phone before I issue a verdict. In the meantime, check out the photos and video to help you decide.