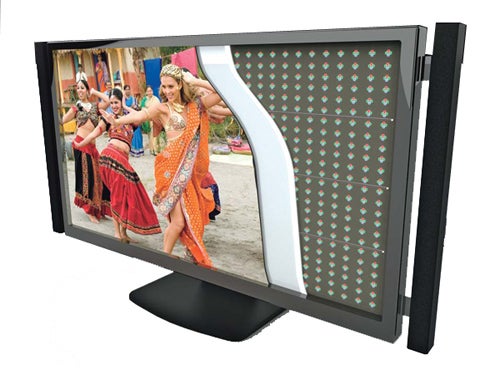 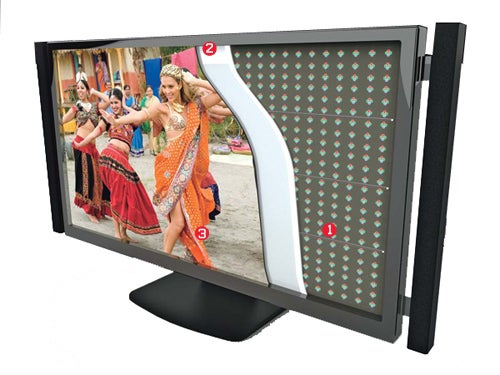 1. The TV controls the brightness in each cluster of LEDs, which produce rich shades of red, green and blue.
2. A filter aligns the light rays so the brightness of one cluster doesn’t affect those around it.
3. Varying levels of light pass through each part of the screen to darken a black skirt, say, or produce a bright glint on jewelry.

Although they are starting to outsell plasma panels, LCD TVs have failed to impress true videophiles, who prefer plasma’s richer colors and deeper contrast. But Sony’s new XBR8 LCDs may have finally closed the quality gap.

Instead of using fluorescent tubes, Sony illuminates the screen with LEDs tuned to produce deeper shades of the red, green and blue that TVs mix to form colors. This allows it to match and possibly exceed plasma in the range of hues it can reproduce, going beyond even the current color palette in high-def TV broadcasts and Blu-ray movies.

Eliminating fluorescent tubes also allows Sony to increase contrast by dividing the screen into blocks, each lit by a cluster of LEDs. So, for instance, the XBR8 can turn off a part of the screen showing a black car and crank the brightness up for a screen segment that depicts a blazing sun.
Three-color LED backlighting and segmented backlights have both been used before, but never in the same TV, because the quality of LEDs is inconsistent. Say the image of a white car stretches across several segments of the screen. All three colors must light up to make white, but if the brightness of the red LEDs varies, for example, the car will break into a checkerboard of tinted squares—some pinkish, where the red LEDs are too powerful, others greenish or bluish where red LEDs are weaker. To prevent that, Sony workers test and handpick LEDs to ensure similar color among neighboring screen segments.

In a side-by-side comparison, the XBR8’s color quality and contrast appeared to at least match a comparable high-end plasma television. And because LEDs consume less electricity than plasma cells, Sony’s new LCD TV outperforms the competition in at least one color: green.