Learn Japanese Calligraphy From A Robot

Technology could preserve the waning skill. 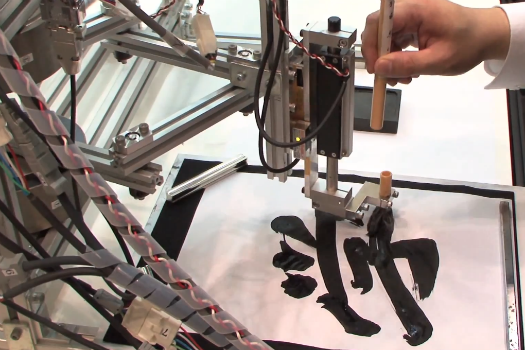 As smartphones and computers become more prevalent in people’s daily lives, many in Japan fear that the ancient art of shodo, Japanese brush writing, will die out. In a 2012 survey by Japan’s Ministry of Education, more than 60 percent of respondents said they believed they were losing the ability to write kanji characters, one of the three types of script used in modern Japanese writing.

Seiichiro Katsura, a professor at Keio University in Tokyo, aims to preserve the classic art form with the help of a deft robotic arm programmed with the skills of a master calligrapher, 90-year-old Juho Sado. It guides Japanese children in the correct calligraphy techniques, helping them learn the right wrist movements, angles and brush strokes orders.

“When you take the brush, it’s as if the master himself is holding your hand and guiding you,” Ayaka Matsui, one of Katsura’s assistants, told AFP.