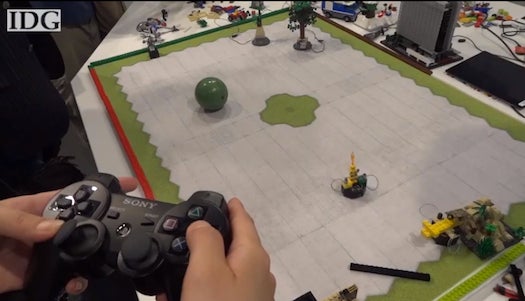 For better or worse, Legos haven’t changed all that much since the company’s founding back in 1932. But a partnership with Sony might change the classic bricks into semi-autonomous machines.

IDG News Service took a tour of Sony Computer Science Laboratories in Tokyo, and found a series of wired Legos, complete with cameras, motors, and a dash of artificial intelligence, all stuffed inside special bricks. As part of a demonstration, a motorized Lego platform controlled by a computer squared off against a platform controlled by a human with a PlayStation controller. The computer’s platform used a camera to locate and chase down the human’s platform. Using the same technology, parts of a brick environment were programmed to explode when they detected motion, creating a Lego minefield. That’s as close to a videogame like LittleBigPlanet Karting as it is to Legos.

This project’s still in the experimental phase, so it’ll likely be quite a while before anyone can pick up a kit from the store. In the meantime, let’s put that technology into this full-size Lego X-wing and get real-life Star Wars.