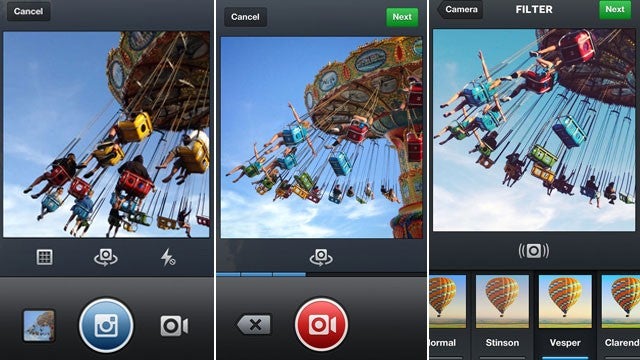 Instagram, the wildly popular photo-sharing app that was bought by Facebook last year for a cool billion dollars, just announced that it now supports videos.

They’re pretty cleanly integrated into your feed; they won’t autoplay as you scroll, instead showing just as a thumbnail with a small icon of an old-timey movin’ picture camera in the top-right corner to indicate that these are videos rather than stills. Tap the image to start playing. Easy!

Videos can be up to 15 seconds long (or as short as 3 seconds), and you can stop and resume recordings while shooting, so you don’t have to take a single continuous shot like you do with Snapchat. All the usual Instagram filters can be applied, and the videos include audio as well. It’s available right now as an update for the iOS app, with Android soon to come.

So, the obvious question: isn’t this just, um, a carbon copy of Vine, the video app launched by Twitter earlier this year? Ha ha ha welllllll yes, it is pretty much exactly the same, except Instagram is an app used by 130 million people a month, and Vine has maybe a tenth that many. And Vine has had trouble; apparently a stream of videos isn’t the easiest thing to grapple with, and Vine is often buggy or slow to load. Instagram videos could be almost three times as long as Vine videos–how is Instagram going to deal with that? “We have to figure this out,” Instagram’s CEO told The Verge.

In my brief testing of the new app, I can confirm it does, in fact, take videos. At least, it takes videos of my tech writer friends at their desks. The future!