How Engineers Redesigned The Office Chair For Smartphone And Tablet Users

Your task chair just got smarter. 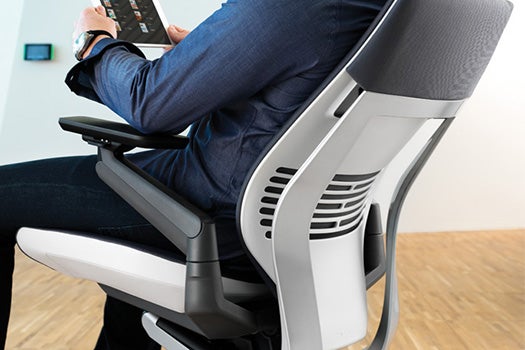 The way people work is changing quickly. About two thirds of workers use at least two devices—tablets, smartphones, computers—every day. Trouble is, standard office chairs are built for people who sit in front of a monitor: back straight, elbows down, feet firmly on the floor. When a person leans, lifts, or hunches, the chair’s armrests and back don’t move with him, causing discomfort. So furniture designers at Steelcase built Gesture, the first chair that supports the slouched backs and roving elbows of mobile-device users.

The designers began by creating a seat and backrest that move in tandem to ensure that the lower back remains supported. The bottom of the backrest connects to a large hinge; reclining forces the hinge closed, which lifts the bottom of the backrest to meet the user’s lower back. Hunching forward lets the hinge open, holding the backrest upright. The team also built the armrests on top of four pivot points so that users can move the arms through a complete orbit—up and in for reading a tablet, for instance—without losing stability. Kicking back with cat videos has never been so comfortable.