How the N-Strike Elite Centurion out-blasts the competition 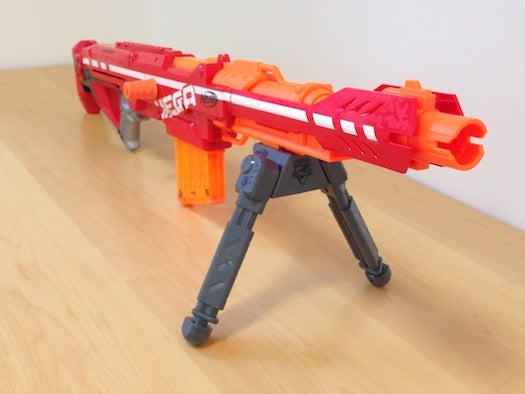 Sniping our fellow editors is a much-beloved and long-standing tradition here at Popular Science HQ. Trouble is: our long hallways leave us no escape from our all too well-armed victims. That won’t be the case for much longer; soon, we can be snipers. We got a sneak peek at the longest-range Nerf gun in history, the 100-foot-firing N-Strike Elite Centurion.

The Centurion is the first in a new line of Nerf guns that use MEGA darts. The darts are about twice the size of typical Nerf darts, which engineers say helps them get the momentum they need to fly further. The also whistle, an oddly satisfying addition to long-range shootouts.

To get the velocity necessary (nearly 55 mph) to catapult ammo one-third of a football field, the designers had to supersize the typical Nerf launch mechanism. With a dart-filled magazine in place, you pull back on a loading handle to allow the top dart to pop into the firing chamber. Pushing the same handle forward sets the firing mechanism in place, and pulling the trigger releases a spring-loaded piston that launches the dart.

As for the gun itself, we’ll be blunt: this thing is freaking huge. It spans 40.7 inches from nose to heel, and at least 2/3 of that length is barrel. As with any gun, the longer the barrel, the straighter – and hopefully the farther – shots will soar.