A kayaking kit that won’t eat up storage space. 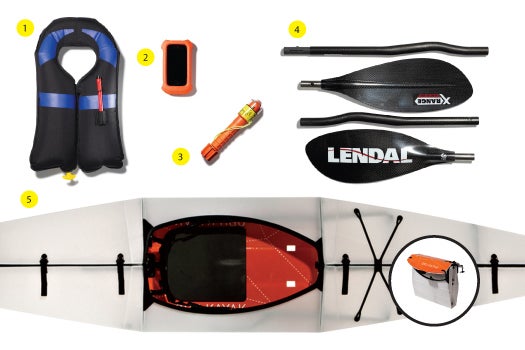 The low-profile M.I.T. 100 inflates faster than most vests. When submerged, water dissolves a wood-based powder that covers a pin, which strikes the CO2 inflation cartridge. The process takes less than four seconds. Mustang Survival M.I.T. 100 $161

To survive going overboard, a phone needs waterproofing and flotation. The LifeProof system has a waterproof case and buoy. The float is a four-rubber blend that’s both rigid enough to grip the phone and buoyant enough to save it. LifeProof Fre $80 LifeJacket $40

The reusable Odeo can replace an entire bundle of pyrotechnic flares. Instead of a flame, the battery-powered flare has five eye-safe lasers attached to a 240rpm motor. It creates the light of three regular flares and will shine for more than five hours. Odeo $200

Even the most punishing wave won’t snap the carbon-fiber X-Range paddle, whose titanium joints help it withstand up to 900 pounds of force. Assembled, the paddle weighs less than two pounds—the lightest in its class. Lendal X-Range $470

The Oru folds into a water-ready craft in five minutes. Instead of a frame, the structure folds to support itself. Four folded layers, for instance, form the nose like a milk-carton spout. Rubber gaskets seal the top of the 12-foot boat. Oru Kayak $850