This Clock Tracks The End Of The World

The clock monitors how close we are to doomsday, as decided by the heads of The Bulletin of Atomic Scientists. 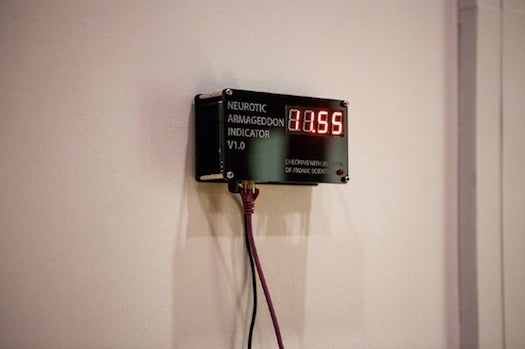 Maybe you’re familiar with the Doomsday Clock. It’s an analogy started by the Bulletin of Atomic Scientists to track how we close we are to the apocalypse by way of nuclear war or other global disaster. Midnight means the end of the world. Artist Tom Schofield went ahead and turned that analogy into reality with this clock, which automatically checks the Bulletin‘s site for updates on the human race’s demise. Cheery!

As of 2012, the clock’s been set to 11:55 p.m. (Gulp.) That’s not the closest to midnight ever–it was set to 11:58 back in 1953–but it’s still too close for comfort. That’s where Schofield’s clock, the Neurotic Armageddon Indicator, is sitting right now. It uses a computer program to regularly check the Bulletin of Atomic Scientists’ website for any time changes, then adjusts accordingly.

Hard to say when that change is coming, though: the hands have been altered just 20 times since the clock started in 1947, and often they aren’t change for several years. So Schofield’s clock will neurotically check the Bulletin’s site until the real clock budges. Unless it’s midnight, in which case it’s going to be tough to find updates.