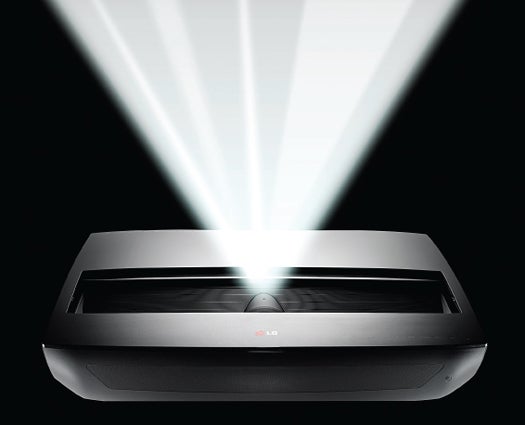 Projecting a large image in a small room is almost impossible, an unfortunate result of how most projectors work. In them, light passes from a bulb though a colored LCD panel and diffuses across a room. The farther back the projector, the more the light spreads, expanding the image; for example, a standard projector 12 feet from the wall produces a 100-inch picture. To create the same image from less than two feet away, engineers at LG used lasers instead of a bulb in the new Laser TV HD projector. The stronger, less-diffuse light is easier to manipulate at short distances.

The projector alters images in two ways. First, its processor runs the picture data through algorithms that expand the bottom corners of the image to compensate for the severe angle of the projection. The augmented image then bounces off a concave mirror opposite the laser light source, which expands the image and reflects it up, out, and onto the wall. The resulting picture is as bright and sharp as that of most flat-panel HDTVs.