Amazon’s X-Ray Answers The Question “Where Do I Know That Actor From?” While You Watch

A seamless, real-time infusion of "who is that guy again?" into your TV-watching experience 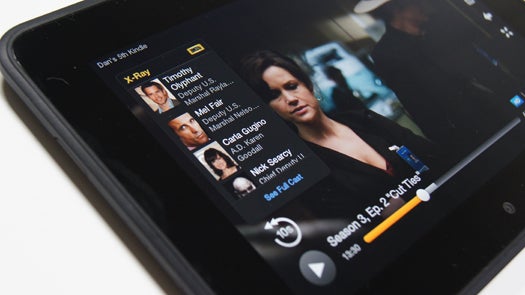 It’s happened to all of us: you’re watching a TV show or movie, and an actor, one of those hundreds of actors who bounce around from supporting role to supporting role, pops up, as the doctor with a few lines, the doomed vacationer in a procedural, the cop who just can’t let this hotshot play by his own rules any longer. Amazon’s X-Ray feature makes figuring out the identity of that actor literally as easy as one tap. I sort of can’t believe how well it works!

When you’re watching any Amazon video–that means videos purchased a la carte from the iTunes-like Amazon Video Store, or the many videos available for free in the Netflix-like Amazon Prime Video area–you can simply tap the screen to display IMDb data. That’d be convenient enough, if it just gave you a quick link to the IMDb page for whatever you’re watching. But it goes a step further: it actually maps exactly who’s on the screen at that very moment.

In this episode of Justified pictured above (Amazon has exclusive streaming rights on Justified, which is just the best show), you can see that when you tap the screen, you get the pause menu with the bonus of a list of actors on the side. Here’s what’s cool: that list of actors changes dynamically depending on who’s on screen! The only people in the list are the actors you can actually see, and it is remarkably accurate, even down to the minor characters in the background.

Amazon purchased IMDb, the Internet Movie Database, way back in 1998. IMDb is the repository of all film/television industry metadata–actors, directors, writers, various crew members. It is astoundingly deep; uncredited roles show up on IMDb, as do weird public access shows, the most minute parts in independent productions seen by a few dozen people. Amazon has been updating IMDb from its era as a simple collection of lists; it’s not one of the best places to watch movie trailers, for example. But X-Ray is easily my favorite implementation of IMDb’s huge amount of data.

X-Ray isn’t compatible with every show, and it only works on the Kindle Fire tablet and, oddly, the Nintendo Wii U‘s Amazon app. Hopefully Amazon will expand it to the other apps, for Roku and Xbox 360 and iOS. But it’s a really great differentiator for Amazon, compared to Netflix or Hulu Plus–it’s integrated really well, and it’s genuinely useful. You can try it out now if you’ve got a Kindle Fire or Wii U–no app download necessary.