Graphics are peaking. That means Sony had to show off everything else. 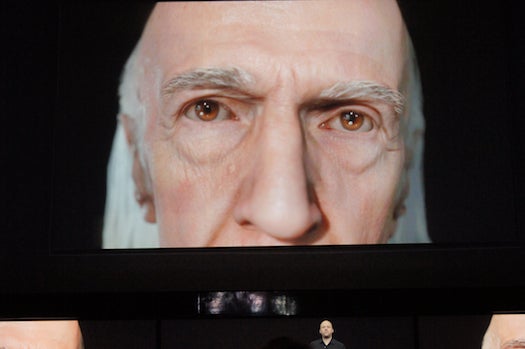 One of the oddest moments of last night’s PlayStation 4 announcement came when developer David Cage explained why the new console would blow everything else out of the water. He’s worked on quite a few games over the years, and, you see, those games had polygons, and this new console used not 500, or even 15,000, but 30,000 polygons.

Someone in the balcony clapped. No one seemed to understand if or why that was important.

Because it really wasn’t. Truth is, this was the first major Xbox or PlayStation announcement that didn’t feature graphics that were retina-popping for the time. That meant a lot of talk about other functions: social applications, streaming, and the number of polygons the games use, whatever that means.

That part isn’t Sony’s fault. The leaps between consoles is a process of diminishing returns. As creators inch closer to making truly photo-realistic games, graphics will start to peak. The PlayStation 4 isn’t any different.

Here’s an example. Sony announced a new entry in the Killzone series at the event. These are entries from the PlayStation 2, PlayStation 3, and PlayStation 4 versions.

The latest entry looks the best, sure, but only a smidgen better than the latest PS3 title. Which explains why we only saw an abstract glimpse at what the console can really do. Enough games were demoed, but speakers demonstrated the console’s power by (bizarrely) showing a rendered old man and a storm of blue geometric shapes raining on the ground. Not much that the PS3 couldn’t do.

That’s an issue, because graphics have mattered more to PlayStation than any other console. Nintendo has never looked to compete on the same level graphics-wise; they’ve been mostly happy creating games, and legacy series like the Mario franchise, with a more cartoonish sensibility, then experimenting with hardware a la the Wii. Microsoft’s Xbox did try to compete with the PlayStation in graphics, but also diverted resources into extra gadgets like the motion-sensitive Kinect and other functions that could turn their console into a complete living-room entertainment center. Sony had to spend some time relying on the games they already had, and what they looked like, before they caught up.

Without truly new and beautiful games to focus on last night, the majority of the announcement shifted to everything else about the system. It streams games! You’ll have a Facebook-style profile! Your friends can watch along as you play! The games themselves were mostly sequels from already established series and developers. All of that information made the end, when it became clear Sony wouldn’t be showing the actual console, even worse.

So we didn’t learn a whole lot about the PlayStation. And part of that’s because the graphics couldn’t speak for themselves.