Why I Love Chromebook, And Why The Ultra-Premium Chromebook Pixel Makes No Sense

Google's weird browser-only operating system is surprisingly capable--but the just-announced Chromebook Pixel is the complete opposite of what a next-gen Chromebook should be. 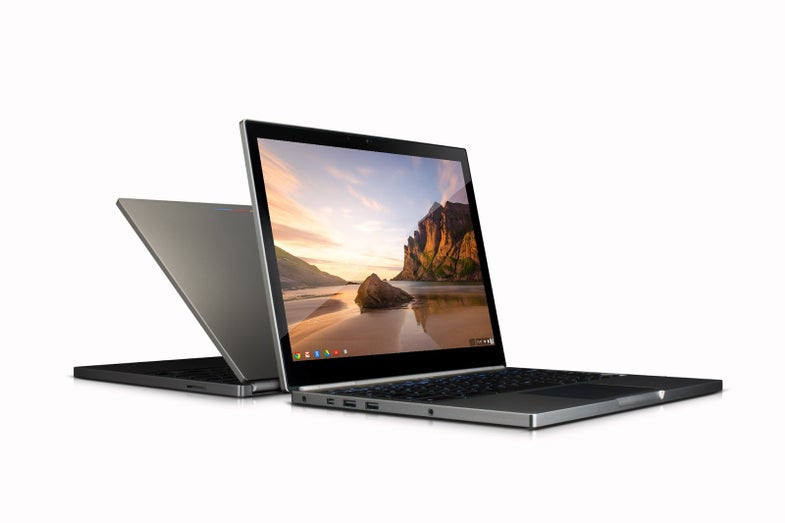 If someone has never used a Chromebook, it’s hard to explain why it’s actually a good idea. Chromebooks look like laptops, but instead of running Windows or Mac OS or Linux or, hell, even Android, they run Google’s Chrome OS. Chrome OS is just Google Chrome. Yeah, the browser. That’s it, pretty much. It’s just a browser, with some little extras like 16GB of storage and a rudimentary file browser. It sounds insane, it sounds unnecessarily limiting, and it sounds like a joke.

Google just unveiled the Chromebook Pixel, which is…not what I expected.But it’s not! Matter of fact, I’m typing this on a Samsung Chromebook right now, because not three hours ago my four-year-old MacBook Pro made a noise like a bug zapper killing a mosquito and then turned off in the middle of a post. (I’m not sure what’s wrong with it.) And I haven’t lost a step. For casual computing use, a Chromebook is far more capable than, say, an iPad–it has a real trackpad, a real keyboard, it can play Flash and basically everything else on the internet, it has good web apps for easy stuff like instant messaging and Twitter and Evernote all the way up to complex stuff like image editing, I can get my music and video from web sources like Rdio and Hulu, I do my office-type stuff on Google Docs, and, basically, there’s very little that a low- to mid-intensity user would want to do that it can’t do. It’s quicker and thinner and more power-efficient than those crappy 10-inch netbooks everyone used a few years ago, because it’s so streamlined in function. And more to the point, the Samsung Chromebook costs $250.

I often use it as a secondary machine; I have, or had, until this morning, a more powerful computer at home, and then I can use the very small and light 11.6-inch Chromebook when I’m out and about. I’ve covered tech events with it and found it super capable of doing just about everything I needed it to do. And at $250, I don’t really care if I drop it or if it gets scuffed. It’d even be a totally adequate primary machine for someone who doesn’t do much besides browse the web anyway.

Up until now, I’ve really liked the direction Google has been going with the Chromebook line. Early Chromebooks used Intel Atom processors, a low-power laptop chip, and cost anywhere from $350 to $550–not that cheap, really. But the one I’m using now, the newest Samsung, uses a high-end mobile chip, like what you’d find in a nice tablet. That gives it better battery life, a smaller footprint, and, surprisingly, not really much noticeable loss in power. Plus, it can be cheaper, which is how the Samsung costs only $250.

That’s the right direction for these computers–they are definitely more limited than a computer with Windows or Mac OS, so keep the price super low, make them thin and light and keep hammering away to get the most power with those priorities. I expected the next Chromebook to cost either $250 or maybe even $199, to have a higher-resolution screen, maybe double the storage to 32GB, and to have the next-gen mobile processor. I was wrong, apparently.

Google just unveiled the Chromebook Pixel, which is…not what I expected. That’s not to say it doesn’t look nice; it has a very premium, industrial look to it (maybe even too industrial), a far better screen, and 32GB of onboard storage (plus a full terabyte of online cloud storage). So far so good! But Google went a little nuts with the hardware here; the screen, a 13-incher, is among the best in the entire market, with a 2560×1700 resolution at 231 pixels per inch–that’s crazy, like nearly as good as Apple’s ultra-expensive Retina displays. If that strikes you as an odd resolution, you’d be right; it has a 3:2 display instead of the typical 16:9. That makes it much taller and squarer than a regular laptop: the same ratio as an iPad.

The screen is touch-enabled, for no reason I can tell. Touch interfaces really only work when the software is designed from the ground up to be finger-friendly. Chrome OS is just regular Chrome. Try tapping on your browser right now. That’s how this’ll work. And The Verge notes that the screen isn’t exactly as smooth as an iPad or a Windows 8 device.

Even weirder, the thing has an Intel Core i5 processor. That’s a very powerful, totally modern chip, the same one Apple uses for its 13-inch MacBook Pro–which is a laptop with much higher power needs than a laptop like a Chromebook.

The worst thing: the cheapest version of the new Chromebook, which comes with 32GB of storage and no mobile wireless (more expensive versions are compatible with Verizon’s 4G LTE network, much like more expensive versions of tablets like the iPad), costs $1,300. That’s significantly more than great Windows 8 computers like the Microsoft Surface Pro and Lenovo Yoga 13, and even more expensive than the smaller and much, much more capable 11-inch Apple MacBook Air.

Even for someone like me who likes Chromebooks a lot, I can’t imagine paying $1,300 for one. Chrome OS is stripped down and basic; it’s most tempting when the price and hardware is also stripped down as far as it can go. Nobody asked for a crazy-powerful Chromebook and I have a hard time coming up with an example of a single person who’d buy the Pixel.