What We Expect From Tonight’s PlayStation Announcement

A new PlayStation! With a slightly different controller, better graphics, and more. 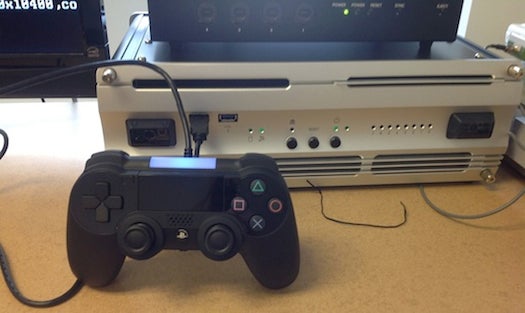 Tonight, Sony will announce what’s all but certain to be the new PlayStation. A lot is still up in the air, but here’s what the rumor mill has churned out so far.

Last week, photos leaked of the controller you see above, and they were confirmed to be a prototype controller for the new PlayStation by a source speaking with Kotaku. It looks similar to past models, but some of the differences are notable: it has what looks like a touch-sensitive pad on it, which would probably control something on-screen, rather than acting as a display. There’s also a blue bar that’s reminiscent of the PlayStation Move, a motion-controlled accessory to the PlayStation 3. That same blue glow is on the accessory, and picks up on movement. So the Move, or something like it, might be built right into the controller now. It’s also possible you’ll somehow be able to control the system with your phone.

You might remember how streaming services that sent games directly to the device of your choosing without the need for a physical disc were the Next Big Thing In Gaming for a while. That hasn’t quite come to fruition, but there are hints the new PlayStation will offer some kind of similar service. Sony recently registered the domain playstation-cloud.com and others for something called PlayStation Cloud, and last year, the company bought the game-streaming company Gaikai, which beams games to the gadget of your choice. If they do announce something like this, it’s bound to be one of the more interesting, if not surprising, developments. Game streaming is really fascinating, but some of the exciting companies working on it haven’t fared well.

Backward compatibility with past PlayStation games will likely be there somehow, possibly through the streaming system.

But maybe not that much prettier. We’ve seen the leaked specs, but what does that mean for how beautiful a game will look? Well, it’s almost certainly not going to be as profound a leap as it was from PS1 to PS2 or PS2 to PS3. (That’s expected: Graphics are slowly starting to peak. The closer you get to portraying real-life, the harder it is to move forward.) BuzzFeed reported games might include 10 times as many assets (details, to be short) than PS3 games, but that doesn’t mean it’ll look 10 times “better.” It’ll mean something like 10 times the leaves on a tree. (That could also mean bigger dev teams working on bigger games, but that’s a ways down the road still.)

A source told Kotaku that the system will have two models priced at $429 and $529, but that a pricing announcement won’t be made until this summer, at the E3 gaming convention. It’s not clear exactly what the difference in the models might be, but it’s probably storage space on the device. At those prices, it would be cheaper than the two PS3 models at launch ($500 and $600), and although it’s clearly looking for a different audience, the 32GB Wii U launched at $350.

On the other hand, there’s also word that the new PlayStation will move to a subscription model for online play, similar to its counterpart, Xbox Live.

This has been a strange one. For a while, the new PlayStation was rumored to have some kind of a “share button” that would allow a player to share video or screenshots when pressed. The new PlayStation, according to the report, would continuously record the last 15 minutes of play, and any of that footage could be shared. It doesn’t look like that’s in the early controller, but who knows?

Early reports pegged a U.S. and Japan release date for “by Christmas,” possibly in November, but that remains to be seen.

A COUPLE THINGS WE DON’T EXPECT

There was a hullabaloo over Sony patenting technology that could be used to track the “real” owner of a game, and keep used versions from being passed around. But there’s a big difference between patenting an invention and earning the scorn of used-game players everywhere.

AND WE EXPECT A NEW NAME, OBVIOUSLY

The code name associated with the new PlayStation was “Orbis,” but the new console will almost certainly be called the PlayStation 4. Sony has an identity built up by now and it’d be a big surprise if they veered off course.