A Portable Fuel-Cell Charger With Weeks’ Worth Of Juice

The butane-powered Nectar fuel cell can get your phone some juice when it needs it. 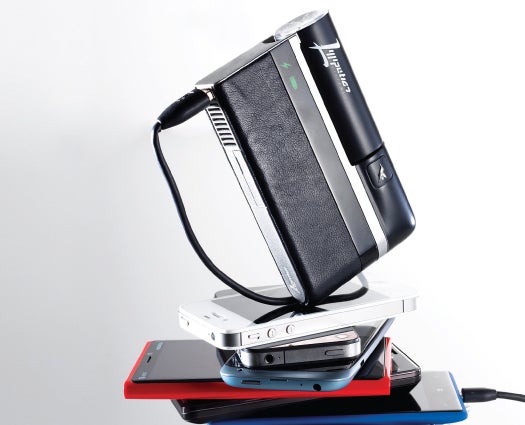 Cellphone batteries once lasted a week on a charge. Today, power-hungry smartphones require daily plug-ins—sometimes more—which makes carrying adapters and hunting for outlets a part of everyday life. Engineers at Lilliputian Systems, a Massachusetts start-up, have developed the Nectar fuel cell, a portable charger that generates enough juice to power a USB-enabled phone once a day for two weeks.

Unlike other portable power sources, which store energy in batteries, the Nectar runs on butane. When a user plugs his phone into the Nectar’s USB port, a replaceable butane cartridge releases fuel into the cell. As fuel passes over a ceramic membrane, oxygen ions pass through the surface, which generates a current. The process can run as hot as 1,830°F, so the engineers built a network of insulating silicon-nitride tubes to keep the Nectar’s exterior cool. Once the butane cartridge is empty, users can recycle it.

After Lilliputian launches the Nectar in May, the company plans to focus on broader fuel-cell applications, such as building cells into laptops and other devices—pushing AC adapters ever closer to obsolescence.