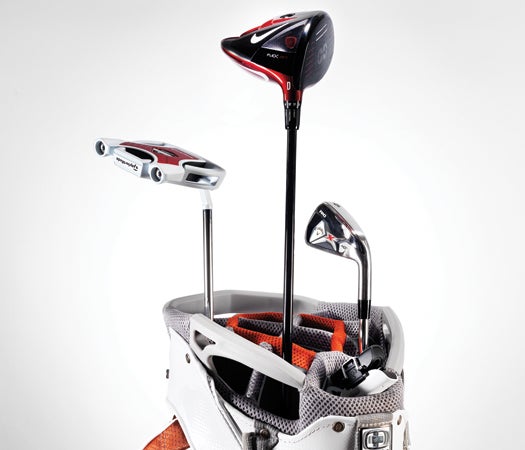 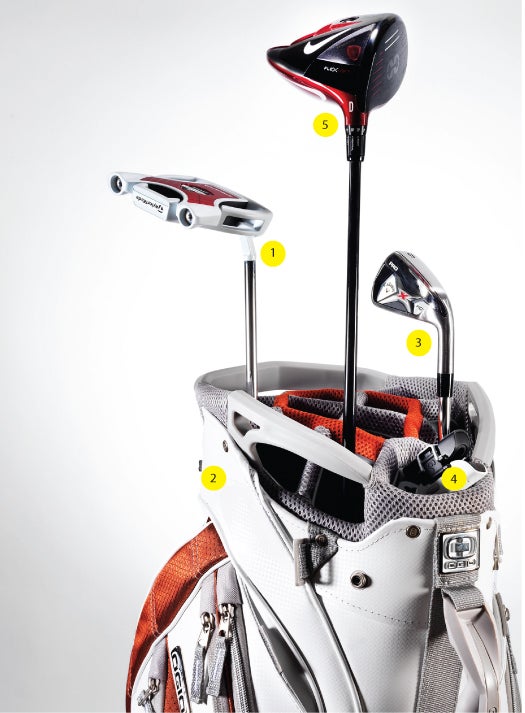 The Ghost Spider S stops bad swings. TaylorMade designers wrapped the putter’s three-ounce aluminum center with eight ounces of steel. The extra weight adds momentum to the swing and makes it harder for a golfer to twist the club. TaylorMade Ghost Spider S $180

A set of several-hundred-dollar clubs deserves some protection, which the Chamber bag provides. To prevent clubheads from moving and nicking one another, designers inserted molded plastic fingers at the bottom of the bag and a slotted silicone membrane at its top. OGIO Chamber bag $300

Callaway’s new irons work around a simple idea: increase speed, increase yardage. A deep groove behind the clubface allows it to flex on impact and fling the ball like a catapult. Shots off the six iron [shown], for example, launch four mph faster and fly more than nine yards further. Callaway X Hot Irons $699 (set of eight)

The Swingbyte 2 can cut down on pricey lessons. Golfers attach the device to the shaft of a club and record video on a Bluetooth-paired smartphone. Accelerometers, gyros, and magnetometers feed data, including swing speed and angle, to the Swingbyte app. The app then displays the data next to the video and offers tips to help the player improve his form. Swingbyte 2 $149

Off-kilter swings lead to hooked or sliced drives, so Nike designers built the VRS Covert driver to ensure straight shots. They dug a cavity out of the back of the clubhead and moved the lost weight—about 0.4 ounce—toward the face. That heft makes the clubhead less likely to wobble and twist the ball at launch. In tests, the Covert added up to 15 yards. Nike VRS Covert Tour $400