Can This App Put An End To New York’s Controversial Stop And Frisk Searches? 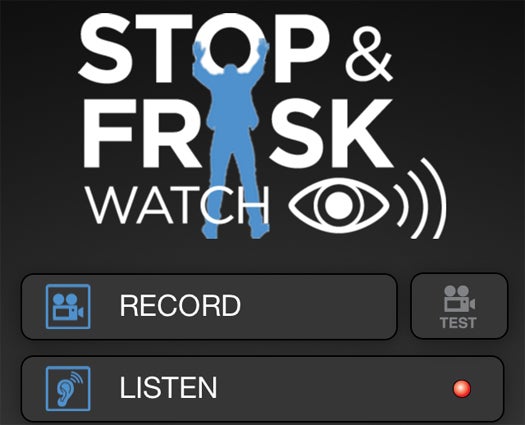 The New York Civil Liberties Union has released an app that lets bystanders document New York’s stop and frisk searches. The Stop & Frisk Watch app has been out on Android since June, and now it’s available for the iPhone.

Stop and frisk, the tactic of attempting to reduce crime by letting police search anyone on the street deemed suspicious, is deeply controversial in New York. A report released Monday by the NYPD showed that nearly nine out of 10 of people searched by police under the law were black or hispanic. Critics say unnecessary force is often used in those searches, but there’s only a video here and there to back that up.

Stop & Frisk Watch has a pretty straightforward strategy for trying to hold officers more accountable. It has three functions: record, listen, and report. “Record” creates a video that’s sent to the NYCLU. “Listen” uses GPS to look for people nearby who’ve activated the app, so you can find out where a search might be happening. “Report” opens a survey about the search that can be sent to the NYCLU, if you didn’t happen to capture video (or if you were the person stopped). There’s also a “Know Your Rights” section that lists what you’re entitled to under law. (Yes, filming the police is legal if you don’t get in the way.)

It’s pretty clearly meant for bystanders more than the person being stopped–it’s not going to be easy for someone to pull out his phone if he’s getting frisked by a cop.

So, regardless of how you feel about New York’s policy, is this going to do anything to battle it? Well, the NYCLU has gotten 5,000 videos since the launch of the Android app from the more than 20,000 people who’ve downloaded it, but only 200 of those videos were actually of police incidents, according to Mashable–the rest were mostly people testing out the app. That’s a lot to sort through in search of an incident, but then again, it only takes one extreme video–like this now infamous one–to sway public opinion.