Will the much-coveted 8-year-old market save the industry? 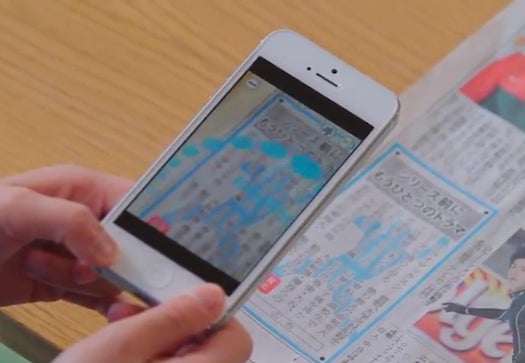 To help sustain a floundering business model, newspapers are reaching for new technology. We’ve seen augmented reality magazines before, and this new one from Japanese newspaper Tokyo Shimbun isn’t that different, except for the intended audience: children.

Here’s the idea: A kid waves a smartphone loaded with the AR App over the paper, and a cartoon character pops up on the screen to rewrite the old-person language, explain the text, and point the kid toward the most important words.

So, first of all, hooray for innovation! But, second of all, this spurs some questions. Like: If you already have the content, why not just post it online, Tokyo Shimbun? Will any kids actually want to use this? Aren’t some newspapers already written so they can be digested by a fairly young audience? Aren’t these children on Twitter or something? And so on.

But if it does work, then good way to indoctrinate the kids early. More years for subscriptions that way.