"Project Shield" tests the limits of what an Android gaming device would be. But is it just a dream gadget? 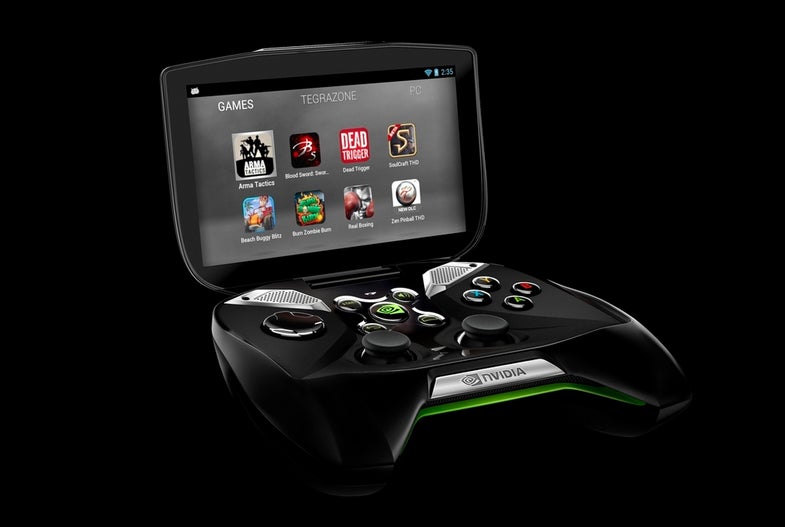 Nvidia isn’t a company everyone necessarily knows; they’ve long been known for graphics hardware, but have recently branched out into mobile silicon with the Tegra line of combination CPU/GPU processors, which are used in some Android tablets and smartphones. Last night they combined those two specialties and added a hefty dose of wild, optimistic insanity, announcing a portable gaming system currently code-named “Project Shield.”

It’s kind of a gamer’s wet dream of what a portable Android gaming device could be; it looks more than anything else like an Xbox controller with a folding screen on top of it. That screen is a 5-inch, 720p touchscreen with a 294ppi density–that’s a “retina” display, I suppose–but what’s weirder is what’s inside. Nvidia says the device can stream 4K movies to a TV via HDMI, that it can stream games from your gaming PC if you’re using a high-end Nvidia card, that it can multitask with the entire library of Android games and apps, that eventually you’ll be able to stream games to your TV when you’re at home, and that it has a 10-hour battery life and that its speakers are vastly superior to any other portable gaming system on the market.

It was demoed on-stage, but, in case it wasn’t clear, I am pretty dubious that this will ever make it to market. Nvidia has a history of announcing crazy things that would be technologically amazing if they existed, and then not releasing them, and Project Shield does not have a price or release date set, so. But it’s an interesting device–would you guys be interested in an Android gaming device with essentially no power limits?