GameSci: How To Preserve A Game You Can’t Pick Up And Hold

The hardware will die so the software can live. 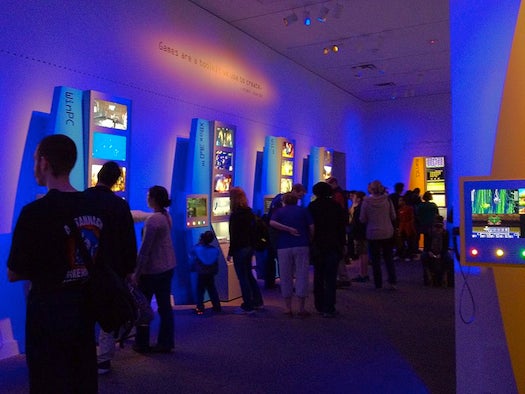 In March, the Museum of Modern Art will be showing off a new exhibit dedicated to videogames. You can check out the 14 games in the collection here–they’ve got picks from Pac-Man to Portal_–but there’s one in particular that caught my eye: _Canabalt.

Canabalt is a browser and mobile game where you control a character being flung across urban rooftops. You jump and try not to fall down any chasms for as long as you can, evading furniture, jumping through glass, and watching for crash-landing spaceships. It’s fun, and as an example of modern quick-and-dirty games, probably worthy of a spot in the MoMA collection.

There’s just one weird thing about it. Canabalt only exists in ones and zeroes.

You download Canabalt to your iPad or open it up in a new browser tab. You don’t buy a copy of it, wrap it, and put it under the tree for Christmas. So how do we preserve, and exhibit, games like Canabalt?

To answer that, it helps to know a little about how hard it is to exhibit and preserve physical games. Because whether we’re talking about games for the iPad or the arcade, the goal is to put the code above everything else.

There are hardware issues, too. It’s impractical to reproduce everything about a game that came out 30-plus years ago, but at the same time, you could argue, it’s part of the experience. (Are you really playing Pong if you’re not doing it on the original machine?) And that’s just speaking philosophically. There are some serious technical difficulties that come along with reproducing old games with new technology. Jason Scott has done a lot of the leg- and brainwork in a great post on vintage game emulations, but the (very, very, overly) brief version is: New equipment shows games differently, if almost imperceptibly, than old equipment.

So games aren’t going to be exhibited exactly as they were when they were on the market. Kate Carmody, a curatorial assistant at MoMA working on the exhibit, puts it this way: “A designer can put a chair in there but it’s not really a chair until someone sits in it.” You can add in a placard emphasizing the cultural and historical importance of said chair, Carmody says, but it’s not really performing its intended function. Same with a car put on display but never driven, same with an architect’s design for a building no one will walk through, and same with videogames that aren’t being played, either in their original context or at all.

At MoMA, she says, the games will be displayed based on what format will work best for the specific game, which is pretty much the only thing you can do when you’re including as many genres as MoMA is. They’ve got bases covered in arcade (Tetris), online sci-fi (EVE Online), and more. For the shorter games, the curators plan on creating some sort of area where visitors can play through games in their entirety, or at least sample games like Pac-Man enough to get the gist of them. The original hardware, like a Pac-Man machine, won’t be used. Those older games, with more fragile hardware, will be played through an emulator, a modern reproduction of the original game. And instead of the original hardware, like a Pac-Man arcade machine or Commodore 64 loaded with Tetris, the curators are opting for uniform controllers and televisions, as a way to get past a nostalgia bias, Carmody says.

The more complicated the game, the more involved the exhibit. Online games like EVE are games based on thousands of players, Carmody says, and bottling that for museum-strollers isn’t easy. Although it wasn’t set in stone when I spoke to her, Carmody says the online games will probably be produced through a guided tour, while longer, more modern games like _flOw and Portal will be displayed through some kind of video demo that explains the game to visitors.

Canabalt will have the opposite problem of most games. It’ll need to have the hardware added to make it work. MoMA will be compensating for that by introducing some sort of computer and mouse system that replicates the feel of the game. (No plans for introducing an iPad just yet.) But there’s not going to be anything tangible about Canabalt. It exists in code–that’s it. For as long as the code lasts, so will the game. The only preservation happening is of the storage devices it’s loaded on to.

There was a time when game companies looking to copyright their work used to send a few minutes of gameplay and (no joke) a printed version of the first and last 25 pages of source code to the Library. A few years ago, game companies started filing physical discs. (Films, by contrast, file through the Library with a 35-millimeter print.) David Gibson, a technician at the Library of Congress, says the full source code is the ultimate way to preserve a game–but it’s not what they get. “Ideally, we would get all the source code … that’s the goal, or the holy grail,” he says. “But the game companies aren’t any kind of a hurry to do that, even to a cultural institution.”

In lieu of that, the Library shelters the physical copies of the games. Meanwhile, Gibson is hoping to find some way to get digital copies stored for preservation, in the same way films get a digital treatment. That might not do much to preserve the hardware, but at least the digital soul of the game stays intact. In the future, then, when researchers want to dissect Space Invaders, they can, even if they’re not doing it on an original arcade machine.

That’s the upshot here. The arcade machine and other vintage systems are dead. Their era is over. And the Pac-Man machines and Super Nintendos aren’t going to last forever. But their games will live on in digital form, and we can simulate the original hardware if we want to. Even if we lose a little piece of what made us fall in love with them.