Drone Vision Turns The Ordinary Hunter Into A Sharpshooter

XactSystem tracks your aim, then corrects it. 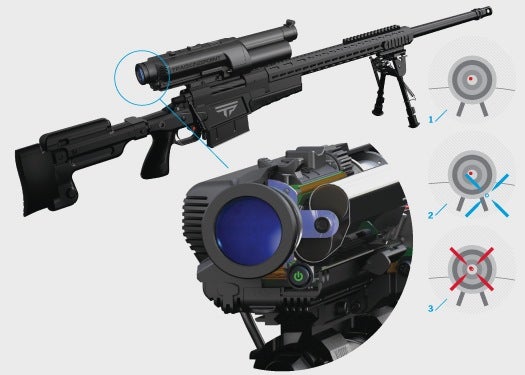 Research suggests that laws making it harder to kill people with guns might help fewer people be killed by guns. Courtesy TrackingPoint
SHARE

John McHale considered himself a respectable shot until he tried hitting a gazelle from 300 yards on a safari in Tanzania, a tough kill even for a more seasoned marksman. Conventional long-range rifles and scopes, like the one McHale was using, leave the hunter to account for the angle of the gun, the temperature and air pressure, and the curvature of the Earth. McHale, an engineer who developed DSL technology in the late ’90s, knew a computer could correct for all of those factors. This spring, his start-up, TrackingPoint, will release the XactSystem, a line of hunting rifles and scopes that employ the computer vision of military drones to make any hunter accurate at distances of more than 1,000 yards.

The XactSystem’s scope augments the hunter’s aim with calculations from a ballistics computer. A hunter presses a button inside the trigger guard to mark a target with a red dot on the scope’s display. The ballistics computer then takes over. It gathers data from a laser range finder, three gyroscopes and accelerometers, and environmental sensors and then displays a blue X where the shot is most likely to land. As the target moves, a 14-megapixel camera feeds 54 frames per second to an image processor, which continually tracks the target relative to the background. The hunter adjusts his aim to overlap the blue X over the red dot and then squeezes the trigger. When both marks are perfectly aligned, the gun fires. The Wi-Fi-enabled system also streams video to a smartphone or tablet, so hunters can prove their marksmanship to skeptics.