CES 2013: The Hideous Glitz Of My Favorite Event 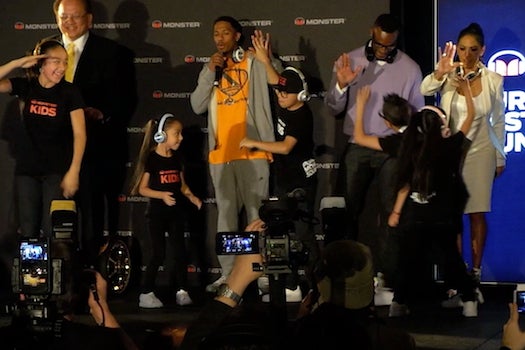 There is a long line of celebrities standing at the back of the stage. Noel Lee, the CEO of Monster Cable, wheels around in front of them on a Segway with gold-painted rims–the gold just a bit too orange–and flame decals. (Lee has a physical disability which impairs his ability to walk, and has turned his use of the Segway into a trademark.) Tyson Beckford, the supermodel, is a pro, encouraging, smiling, clapping. Xzibit, the rapper and sometime-actor, is chubbier than I remember him from Pimp My Ride. He looks alternately bored and confused. Drew Brees, of the New Orleans Saints, wears monochromatic navy blue dad-clothes, and stands awkwardly at the end of the line, his arms hanging at his sides.

CES, which for us press begins today, is stressful, boring, intense, sickening, drunk, and, sometimes, quite a bit of fun, all at once. Today, Monday, is “press day.” Thousands of reporters, editors, photographers, and videographers are in the convention area of the Mandalay Bay casino. Throughout the day, companies hold press conferences, we all line up, we sit down, they show us gadgets, we scramble to post stories, we go to the next one.

As the tech industry has grown, CES has shrunk in importance. Companies have realized they can throw their own press conferences at other times of the year and own the entire news cycle rather than competing with every other company by announcing during CES, and so CES has become more boring and less of those other things. Right now, while I sit at Monster’s half-empty conference, Panasonic is holding their own, and theirs is so popular that they had to turn away press. The few hundred “lucky” reporters and photographers that made it inside get to sit in uncomfortable chairs while the senior VP of the Who Cares Division talks about innovation and how 4K is the future and then shows a PowerPoint with bar graphs of sales and then maybe takes a blanket off of a shiny TV and everyone takes pictures of it and posts them on their tech blogs and then forgets about it and then the shiny TV is never released. 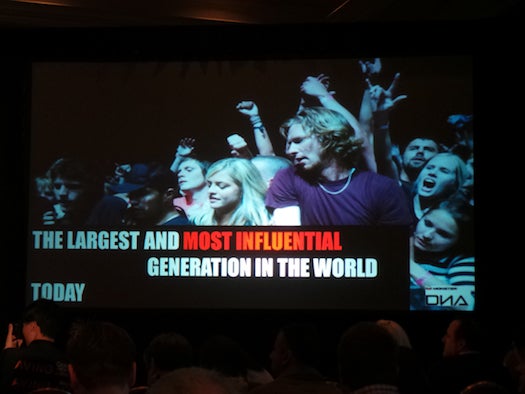 Noel Lee talks constantly, listing the names of products, youth culture buzzwords, marketing buzzwords. He stumbles over all of it; he’s enthusiastic and impenetrably confident, but there’s absolutely no organization in his presentation. It’s impossible to tell which are the new products, which are new colors of old products, and which are old products that are mentioned for boasting purposes. Dubstep plays. There’s a slide of a pair of headphones with slightly triangular ear-padding. “What’s new in the shape of headphones, what’s new in the…shape of the triangle that we hope for…headphones,” says Lee. That is a verbatim quote. Those ellipses don’t stand for other words that would make that sentence make sense. Those are just pauses, while Lee tries to think of the next word. The next word only sometimes continues the thought of the previous word.

The presentation continues. Nobody stops him to ask what in the hell that means. A few minutes later, he yells “Give it up for the Monster Kids!” and a team of breakdancing children comes out on the stage. Lee grins at them, then at the audience. Photographers go nuts. I look around, confused, then write “what in the name of god is happening here” in my notes.

At a Sony press conference, they’ll rent out a huge space in the Las Vegas Convention Center, and use their Sony Pictures movie studio’s pull to have Will Smith or Seth Rogen come out. Monster has a regular little convention room with regular beige chairs and a regular-sized stage, but Noel Lee presents with more arrogance and glee than everyone at Sony combined. He loves this, and it doesn’t matter that he is not good at it. I came away having no idea what products Monster actually announced; Lee was much more interested in introducing Sheila E., and then Nick Cannon, Sugar Ray Leonard, Xzibit, Drew Brees, and Tyson Beckford. They all spoke, obviously without a script. Drew Brees awkwardly spoke about the youth making a difference. Nick Cannon says the youth should be “whatever they want to be.” Sugar Ray Leonard says “I feel like a fighter.” Sugar Ray Leonard is a famous professional fighter. Xzibit is not allowed to speak. 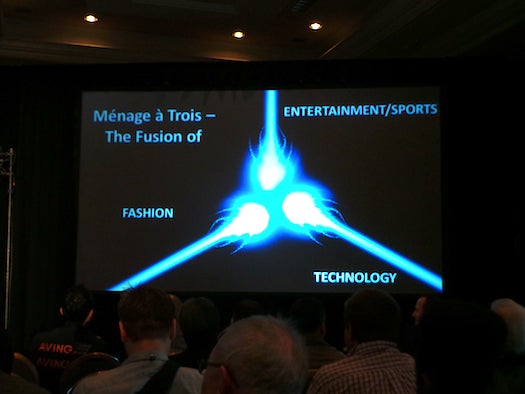 While Lee is introducing these people, he’s firing off non-sequiturs about technology and sales and young people. He says “this is the largest young adult millennial generation out there, it’s growing as fast as can be.” Nobody asks what that means, and Lee blows right by it to the next line. He shows headphones with magnetic spikes coming out of the headband. Models dressed like they’ve blindly chosen items from a Diesel outlet shop walk through the crowd wearing them while Lee hollers that this is “kinky.” He shows a slide that says “Ménage à Trois” with three lasers labeled “entertainment/sports,” “fashion,” and “technology” all meeting in one point. The crowd titters. Lee yells “Don’t act so innocent! Let’s give it up for ménage à trois!” The guy next to me is too busy editing his photos of a PowerPoint slide to hear this. I write “this is bonkers” in my notes.

I checked what happened at the Panasonic event after it ended. They introduced a few new TVs. They’re good TVs, I bet. Panasonic makes nice TVs. I’d actually buy a Panasonic TV. I would never buy anything Monster makes, and nothing that happened at this conference would qualify as “news” in any universe besides the one in which Noel Lee lives his magnetic-spiked life. But I will continue to skip Panasonic’s event, and I will continue to go to Monster’s event, and I will watch Noel Lee cavort with models and rattle off sentences composed of English words but arranged according to some kind of moon-syntax, because it is very obvious to me which one of those is the more enjoyable experience. 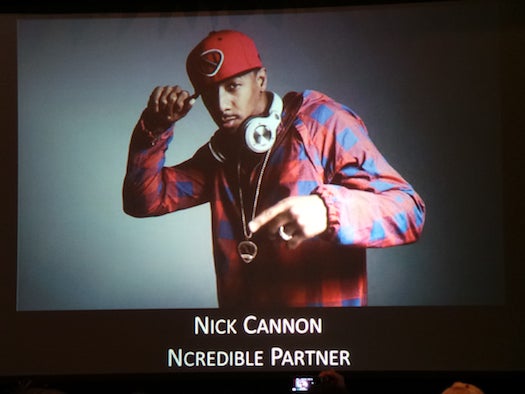 Nick Cannon Is Your Friend