It's pretty! And impractical! 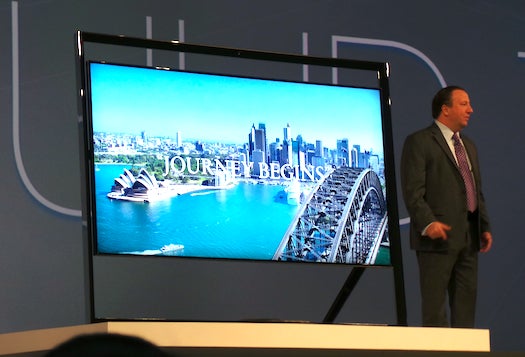 I just got out of Samsung’s CES event, which was mostly not very exciting, unless there’s something about the concept of a fridge with a touchscreen in it that excites you. And if there is that’s fine, I hope you achieve all your life’s goals and get yourself a fridge with a touchscreen in it. But what was weird was this gargantuan 4K TV. It’s an 85-incher, which is absurd, and it’s more absurd because the screen is encased in this metal frame and is not removable at all. So, unless you basically own a hotel or choose to build your home around your new TV, this is going to be tough to fit in most houses.

On the other hand I sort of doubt it’ll ever get released; it’s one of those showy centerpieces that very rarely actually shows up in stores. No price or release date announced.