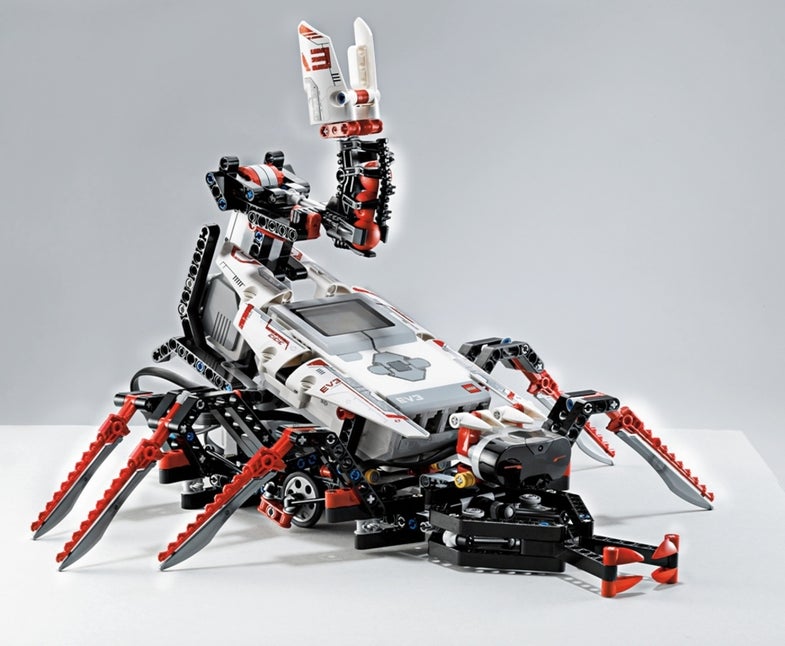 Fifteen CESes ago, Lego unveiled the Robotics Invention Kit, the system that would become Mindstorms. Since then, DIyers have machined ‘bots to do everything from flush the toilet to solve a Rubik’s cube — faster than a human being, no less. Today, the Danish company announced a near-gut refresh of the line, the Mindstorms EV3. The 594-piece kit will be the first Mindstorms system with app support, as well as a sensor suite that allows creations to navigate and react autonomously.

Central to the EV3 puzzle is the central Intelligent Brick. The new model runs on a Linux OS and an ARM9 processor, both of which make the Brick faster and more-easily-hackable than its predecessors. Processor aside, the biggest change on the Brick is the addition of a Bluetooth radio, which allows builders to control their robots via an Android or iOS app.

EV3 robots will also be more “sensitive” than they’ve been before. The robot’s eyes are actually infrared sensors, which can signal the system to attack, flee, dance — whathaveyou — when something crosses its path. A snake model, for instance, will dive at prey when it sees it. The scorpion [shown] similarly devours its prey.

And react it will! Lego has also spent some time speeding up the EV3’s motors, of which it has three. Two main motors feature dual-sided output drives, so they can move twice the appendages at once. While the third, smaller motor spins more quickly for tasks like firing ammo or flicking fingers.