Roku’s New One-Stop Search Finds Your Video, Regardless Of App

This is the way search should work. You don't want to guess if The Big Lebowski is on Netflix or Amazon; you just want to watch it. 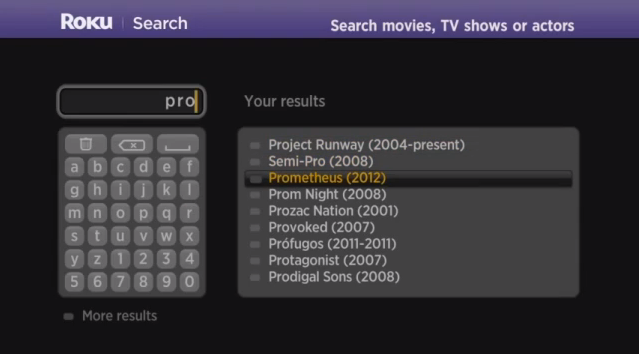 This morning, all newish Roku boxes–that’s the Roku 2, Roku LT, and some older Roku HDs–got an update to support one-stop search. Right on the homescreen, there’s a new search option that’ll trawl through Netflix, Amazon Instant Video, Hulu Plus, Crackle, HBO Go, and Vudu. It’s one of those things that sounds small but that’s actually pretty big–one-stop search is a major tool in unifying what used to be disparate standalone apps, which means it’s a major tool towards making streaming media easier and less awkward to use.

Netflix and Hulu and Amazon and all the rest are great services by themselves, but keeping them in their own walled app makes “streaming media” as a concept much harder to use. There’s no one app that’ll do everything, which is why many choose to subscribe to several at once–Hulu for next-day TV shows, Netflix for movies, Amazon for a grab-bag of stuff and also to buy shows not found on the others. But there are lots of shows and movies that could be on any combination of those services, and it’s pretty awkward to open each app and search.

The Xbox 360, an under-appreciated media streamer in its own right, has had unified search for awhile. And it’s actually better than Roku’s; Roku requires you to use the Roku remote, which is kind of awful, to very slowly and painfully navigate to each letter on the on-screen keyboard. The Xbox lets you use the Kinect and just yell out loud in the direction of the TV that you want to watch eight episodes of The West Wing, right now. But Roku’s works well otherwise: it searches quickly and shows you all the available options, including both paid and free, and whether they’re in HD or only standard-def. If you search for a TV show, it’ll let you narrow your search to just the specific season you want.

Remote notwithstanding, it works very well. And anything that makes the sometimes-difficult world of media streaming easier to use is something that takes us one step closer to our connected-TV future.