Can Smartphones Replace Onboard Electronics In Cars?

They're not only more efficient--they're better, too. These three gadgets are about to get out of your dreams and into your car. 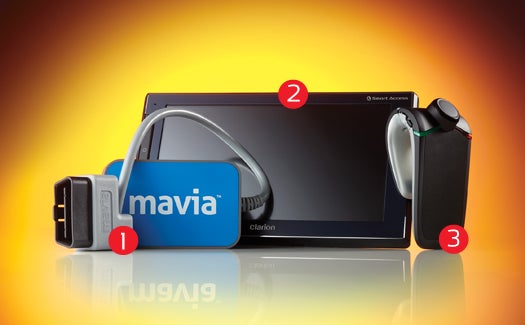 Dashboard navigation and entertainment systems are optional on most late-model cars, but they can add a couple thousand dollars to the sticker price. Now that smartphones have become as powerful as in-dash computers, accessory manufacturers are creating devices that allow phones to take their place—at a fraction of the cost.

Depending on the gadget, drivers can monitor engine performance, find their car in a crowded lot, or issue voice commands to their phones while blocking incoming calls. A single cell-connected gadget can replace several older auto accessories, including Bluetooth headsets and GPS systems. The devices require no professional installation, and owners can easily move them between cars.

1) Mavia by Mavizon
The Mavia dongle enables car owners to diagnose engine troubles and track their vehicles remotely. Once plugged into the car’s standard diagnostic port, the device collects data every 30 seconds about average and maximum speeds, engine performance, and fuel efficiency; internal cellular and GPS radios send data to the cloud, which the owner can access through an accompanying smartphone app. $169 plus $5/month service fee (available December)

2) Clarion Next GATE SC1U
The seven-inch Next GATE display puts a dozen iPhone apps at eye level. Drivers suction-cup the screen to their windshield and connect their iPhone 4 or 4S, which serves as the gadget’s brain. Users can also plug it into the standard diagnostic port for engine updates, or connect it to the car’s stereo to listen to one of its three text-to-speech apps, which read back a driver’s Facebook, Twitter, and RSS feeds. $270

3) Parrot Minikit Neo
The Minikit Neo speakerphone clips to the sun visor. When a driver gets in the car, a vibration sensor signals the 2.5-ounce device to power on and pair with his smartphone via Bluetooth. Neo downloads the phone’s contacts and enables voice dialing. Drivers can also use the Neo smartphone app to set an auto-reply SMS setting, which sends a “busy” text to incoming callers, or to find their car in a parking lot. $100