Amazon presented its new Kindle lineup in Los Angeles today, and there are a whole bunch of new rectangles for... 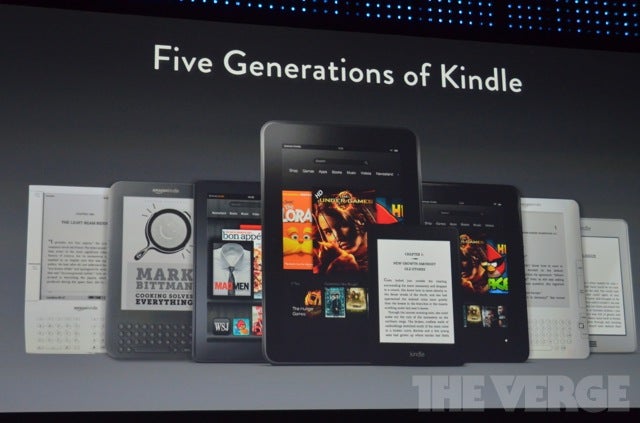 Amazon presented its new Kindle lineup in Los Angeles today, and there are a whole bunch of new rectangles for you to read and watch and work and play on, which I’ll get into after the jump. But the big news, the thing that we didn’t expect and which seems crazy, is that the new Kindle Fire HD With 4G LTE (I swear, that’s its real name) offers a full year of 4G LTE service for $50. Fifty bucks. That’s about $4.17 per month.

So, first, the new hardware. There’s now a backlit Kindle, just like the Nook Simple Touch With Glowlight. Like the Nook Etc With Etc, the backlit Kindle has an appended name–Paperwhite. This kind of backlighting is great–it glows softly for nighttime or low-light use but it’s still a good old electrophoretic (E-Ink) screen, so when it’s daylight, it’s easy on the eyes. That’ll cost $119 for the Wi-Fi-only model and $179 for the 3G. The screen itself has been upgraded; it’s sharper and turns pages faster. The cheapie Kindle, which we love (and we were namechecked loving it! Thanks, Bezos), is even cheaper at $69, and has the new screen (though no backlight).

Then there’s the Kindle Fire. Last year’s Kindle Fire was updated with some better hardware and a lower price, at $159. There’s a new 7-inch model called the Kindle Fire HD, with a better screen, better processor, double the storage (it’s now 16GB), all that stuff, at $199. And there’s a big boy, an 8.9-inch tablet also known as the Kindle Fire HD, I think. It’s squarely aimed at the iPad–Amazon is touting the quality of the screen, the responsiveness of the apps, all that stuff. There are even some cool ideas, like X-Ray, which lets you tap on the screen while in the middle of all kinds of apps to get more information. Click on an actor’s face while watching a movie and it’ll take you to their IMDb page, for example. Pretty sweet! The Wi-Fi-only, 16GB model will cost $299.