Peering through binoculars can make an impossibly faraway object look close enough to touch, but with a trade-off: Any little... 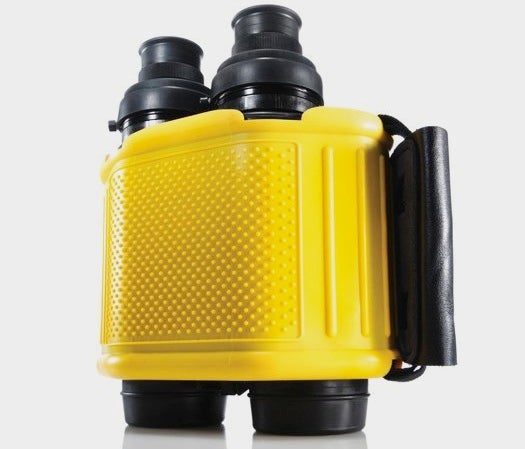 Peering through binoculars can make an impossibly faraway object look close enough to touch, but with a trade-off: Any little jostle can knock a view out of frame. Most consumer binoculars have a built-in image-stabilization system that uses an accelerometer, a processor, and a small motor to compensate for user movements. But that system only offsets slight jolts, and the processing time required creates a several-millisecond lag. Fraser Optics, a Pennsylvania company that has been supplying binoculars to the military for more than 30 years, has adapted its gyroscope-based mechanical stabilization system into the Mariner, a pair of consumer binoculars that cancels vertical movements of up to 50 degrees without any delay.

The core of the Mariner is a pair of prisms that sit between the front and rear lenses and always remain stable. Fraser engineers mounted the prisms onto a bar, which is attached to the interior housing on two ball bearings. A gyroscopic motor attached to the center of the bar spins at 12,000 rpm. When a user hits a bump, the centrifugal forces of the motor hold the bar steady as the housing moves across the bearings; the prisms—as well as the view—remain almost perfectly still. Using the Mariner, an adventurous birder driving over rocky terrain will be still be able to track a rare species from a mile away.