In Boring But Important Case, Samsung Has to Pay Apple Over $1 Billion

So, for the past year, there has been this ongoing legal drama between the two biggest players in the mobile... 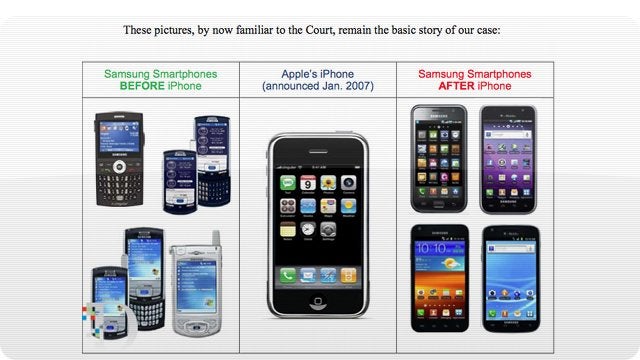 John Paczkowski of All Things D mocked up this chart to show why it shouldn't be surprising that Samsung gets sued for copying Apple--in fact, some of its products have actually been pulled off store shelves by law. John Paczkowski
SHARE

So, for the past year, there has been this ongoing legal drama between the two biggest players in the mobile computing world, Apple and Samsung. Apple, which no sane person would deny pioneered the all-touchscreen, rectangular, app-based modern smartphone we all carry, sued Samsung, the world’s biggest phone manufacturer, for ripping off its designs and violating its patents. And just now, the jury handed down a verdict: Samsung will have to pay over $1 billion in damages.

This will, of course, lead to all kinds of unusually-shaped and irregular polygon-inspired smartphones as every company makes sure its phones are not mistaken for Apple’s. Personally I’m looking forward to the new Samsung Amoeba. Read more about the saga here.