FaceTime for Apes: Orangutans Use iPads to Video Chat With Friends In Other Zoos

Orangutans living in captivity will soon start using iPads for primate play-dates, using Skype or FaceTime to interact with their... 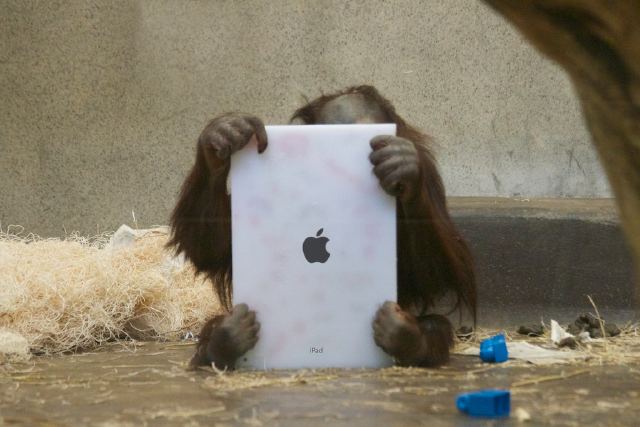 An orangutan named Mahal plays with an iPad at the Milwaukee Zoo. Orangutan Outreach
SHARE

Orangutans living in captivity will soon start using iPads for primate play-dates, using Skype or FaceTime to interact with their brethren in other zoos, according to zookeepers. The great apes have been playing with iPads for about six months at the Milwaukee County Zoo, and they’ve been such a hit that other zoos plan to introduce them, too.

The “Apps for Apes” program started after a zookeeper commented online about getting some iPads for her gorilla charges. Someone donated a used iPad, and it turned out the gorillas didn’t care for it. But the orangutans loved it, as the LA Times says.

The apes don’t typically get to hold the pricey tablets, because they’re strong enough to break them in half, zookeepers said. Instead, a keeper will hold the iPads up to a primate cage and let the apes interact with them. The orangutans have been playing with apps like Doodle Buddy by sticking their fingers through their cages’ mesh. One orangutan, 31-year-old MJ, is apparently a huge fan of David Attenborough nature programs, the BBC reports.

A group called Orangutan Outreach, which is involved in the Apps for Apes effort, is waiting for the iPad 3 to come out so the original iPad will become obsolete and cheaper for zoos to obtain. The Houston Zoo has one iPad but hasn’t introduced it to the orangutans yet, while Zoo Atlanta, the Toronto Zoo and the Phoenix Zoo are waiting to get iPads. When they do, zookeepers across the institutions plan to set up play-dates when the apes can chat via Skype or FaceTime.

Seeing the primates with iPads has an effect on zoo visitors, according to Richard Zimmerman, who directs Orangutan Outreach: “They have this recognition that these are amazing, cognitive, curious creatures,” he told the Times.

Dolphins have been using iPads since their debut, so it’s really about time our primate cousins adopted the technology. 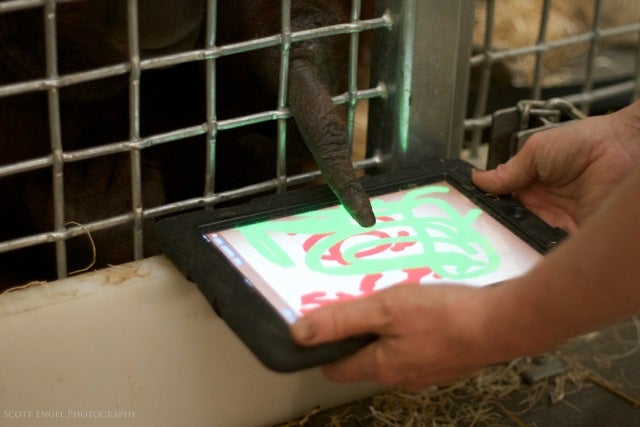