Can anything break a steel-reinforced sledge? 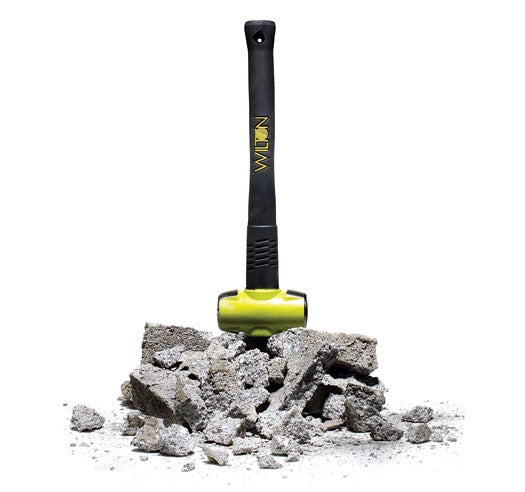 B.A.S.H. is the only sledge to thread the handle through the head. Typical sledges rely on friction to hold the two together. Claire Benoist
SHARE

Sledgehammers are the monsters of demolition. They can deliver enough force to pound boulders into dust, but strangely, it doesn’t take much to break them in two. When workers miss their target and whack the hammer’s handle on debris, called overstriking, the hammerhead can snap off, becoming a dangerous projectile. Wilton guarantees its Bad Ass Sledge Hammers (B.A.S.H.) against breaks, and will cut a $1,000 check to anyone who can destroy one. Depending on the model, up to six steel rods run the length of the handle and affix to a plate inside the head, holding the two parts together. When the hammerhead strikes, the rubber handle disperses the force evenly among the rods, a design that also absorbs vibration.

Knowing that the B.A.S.H. was likely to withstand regular abuse—hours of pounding on concrete and snapping steel joints—I focused on striking its most vulnerable spot: the upper handle. I repeatedly overstruck the hammer on a one-inch-thick steel rod suspended between two-by-fours. After that, I overstruck on a four-inch-square fencepost that I was driving into the ground.

After maybe 1,000 whacks, the B.A.S.H. held strong. In fact, the test was a bit demoralizing—my back felt more worn than the hammer looked. It barely seemed used. The handle flexed gently on impact but never showed any sign of fracture. And the B.A.S.H. is one of the most comfortable sledges I’ve ever swung; the handle absorbs so much vibration that overstriking felt more like hammering a nail than clobbering steel.

With its new FuBar, Stanley multiplies the demolition capability of a normal crowbar, replacing what would be a blunt handle with a heavy-duty slicer. On top, the chiseled end of the 14-inch steel-and-carbon bar is thick enough to break holes in drywall. On the bottom, it’s ground down to a fine edge that can slice through material with a couple of hammer taps to the bar. Stanley FuBar Demolition Bar $20