Over the weekend, faced with the dreaded Yellow Light of Death, I ripped apart a PlayStation 3 and blasted it... 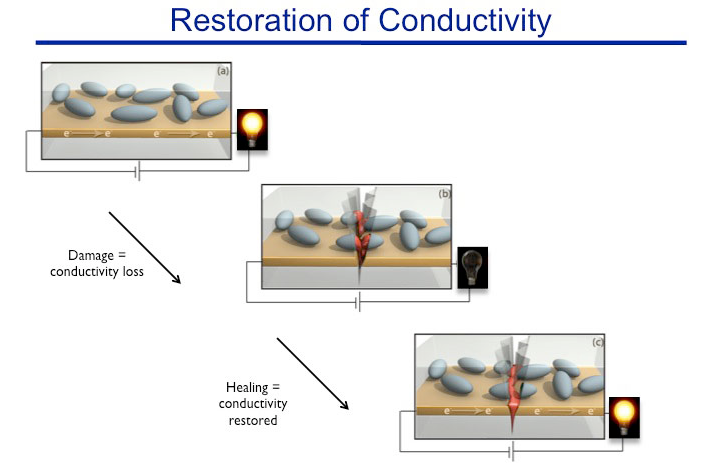 Over the weekend, faced with the dreaded Yellow Light of Death, I ripped apart a PlayStation 3 and blasted it with a 500-degree heat gun to re-flow the GPU and CPU. It was pretty fun and it worked, much to the delight of the member of my household who was this close to finishing “Batman: Arkham City.” Next time, this new self-healing circuit compound could make our work unnecessary.

Broken circuits could fix themselves using an emergency capsule of liquid metal, invented by researchers at the University of Illinois. As a crack propagates in a circuit, a microcapsule breaks open, spilling liquid metal into the gap and restoring electrical flow. The circuit would only be broken for a few microseconds, just as long as it takes for the capsule to fill in the cracks. During tests, 90 percent of the circuit samples healed to 99 percent of original conductivity, even when only a small amount of microcapsules were used, according to the U of I. Watch White explain the system in the video below.

Illinois professors Nancy Sottos, Scott White and Jeffrey Moore had already done lots of work on self-healing polymers and other types of structural repairs, but this is the first time anyone has tried self-healing conductivity. It works automatically and only at the point of a circuit failure. It’s so simple, you wonder why no one has thought of this before.

The method could replace some of the redundancies in complex circuits, perhaps making electronics cheaper, lighter and more sustainable. The researchers even hope it could be used to improve battery performance. The work was published in the journal Advanced Materials.

[University of Illinois via The Verge]