Today at an event in New York, Barnes & Noble’s CEO showed off the company’s new tablet: the Nook Tablet.... 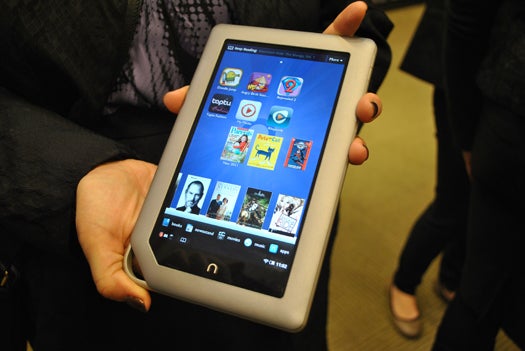 The Nook Tablet looks mostly like the previous Nook tablet: a 7-inch Android-based tablet, focused on media (especially books), with essentially the same design, including that distinctive little loophole in the lower left corner. It’s gotten a bump in some of the internals; it now has a dual-core 1GHz processor and a full 1GB of memory, as well as improved battery life and a new display.

The Kindle Fire is pretty clearly the direct competition: both are 7-inch, very inexpensive (compared to larger tablets like the iPad and Android Honeycomb tablets) based on Android but heavily modified. These tablets are technically Android tablets, but they don’t look like Android, and neither offers access to the Android Market for apps. (The Kindle Fire has access to the Amazon App Store, a sort of alternate Android Market–no word on how you get apps on the Nook Tablet.) Both are focused on reading and media consumption, rather than the do-it-all near-computer-replacement of the iPad. 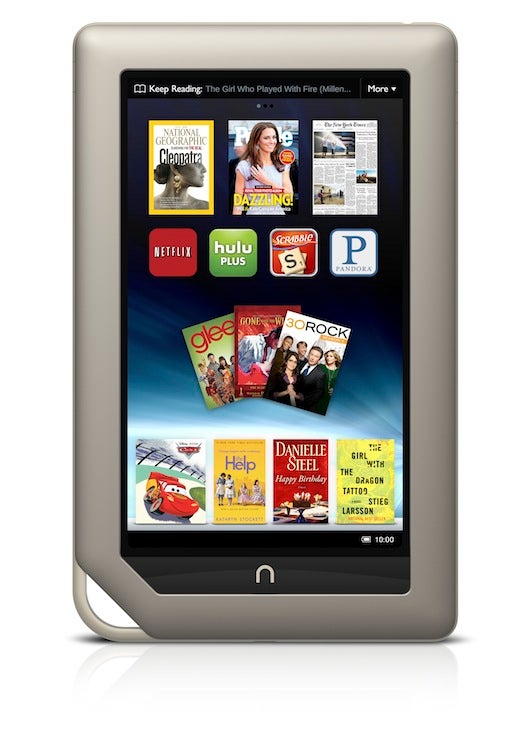 Barnes & Noble was pretty eager to talk about how their tablet is better than the Kindle Fire, which is understandable, since they’re so alike. The company points to those internals: a better screen, more storage, more memory. It still loses out on price; the Nook Tablet will cost $250 when it goes on sale later this month, compared to the Kindle Fire’s $200. But Barnes & Noble also reduced the price of the Nook Color to $200 to compete with the Fire.

The company also improved their Nook SimpleTouch e-ink reader, adding a sharper screen and longer battery life (B&N claims up to two months, which is pretty impressive–longer than the new e-ink Kindles). And, as is the trend, they cut the price of the SimpleTouch from $140 down to $100.

The Nook Tablet can be pre-ordered today, and should be available sometime “late next week.”

Update: I got a look at the Nook Tablet shortly after the event. My immediate thought upon seeing the Tablet is that the screen is worth all of the silly accolades (“VividView”?) heaped on it during the presentation–this screen is ridiculously crisp and bright. The resolution isn’t high enough to actually display 1080p content, which makes the claims that it can play 1080p content sort of snake oily, but that’s not to take away from the quality of this thing. Videos looked just fantastic, as did text.

Navigation seemed, to be honest, a bit stuttery. It’s not unusable, and does seem faster than the original Nook Color, as befitting its new processor, but it’s not nearly as buttery smooth as the iPad. Panning through a complex, Flash-laden site like CNN, for example, was pretty jittery. The UI is pretty easy to use, and true to form does not look much like Android at all. 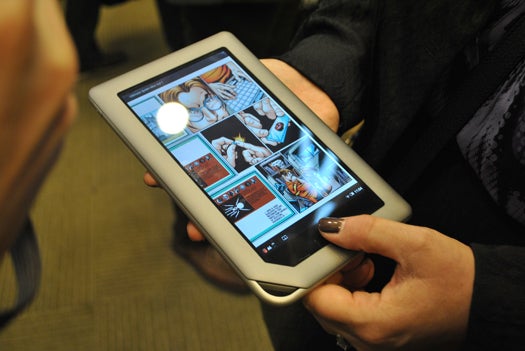 It doesn’t have nearly as many exclusive content deals as the Kindle Fire, but what was there looked good: deep Netflix navigation (so you get recommendations on the homescreen, very cool), Netflix/Hulu/Pandora built in, and a deal with Marvel comics (seen above).