Amazon Kindle Fire Review: So Much More Than an Ebook Reader 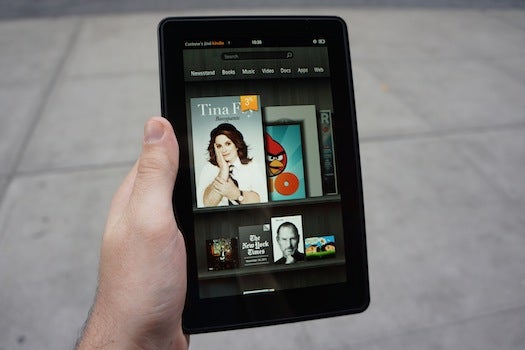 People throw around a lot of big phrases when they talk about the Kindle Fire — “iPad killer” being an oldie but goodie. But after spending some time with the 7-inch Fire, one thing is abundantly clear: this ain’t no iPad killer. This right here is something else entirely. Less a “tablet” in the sense we’ve come to think of it than a content-delivery device, the Kindle Fire is a window to serious, non-stop entertainment consumption. And Amazon shopping. Lots of Amazon shopping.

Right off the bat, let’s agree on one thing: the Kindle Fire is not an “Android tablet” — not in the way the Xoom and all its Honeycomb successors have been, at least. The Fire is Amazon’s closed-platform media viewer, a Kindle with the power of color and touch, a screen on which you can watch, read, and listen to just about anything Amazon has to offer. If you buy the Fire from Amazon, when it arrives at your doorstep, it’ll be linked with all your Amazon accounts (Cloud Player, Kindle, Prime, App Store) and allows access to all that content either streaming from the cloud or downloaded to the device itself.

To start at the beginning, Amazon has rendered setting up the Fire more or less moot; when I first powered it up, it was already linked with my Kindle books, Prime subscription, and one-click payment settings. The selection of music I’d uploaded to my Cloud Player appeared on the Music area, and albums transferred to the device’s internal storage with a click apiece.

But syncing isn’t just about mirroring content from device to device; it’s about making sure all your devices are on the same page, whether or not there are any pages involved. I rented, downloaded and started watching Horrible Bosses on my commute home, left the Fire in my bag, and picked the flick right back up on a Roku box’s Amazon app over dinner. That’s thanks to Amazon’s WhisperSync, which tags your place anytime you’re connected to the Web. Video quality was excellent, and the screen is especially good for video: the widescreen display has almost as much screen space as the much larger iPad when watching widescreen video, and it’s very clear, bright, and colorful. The debate about reading on an LCD like the Fire’s, versus an e-ink display like the other Kindles, rages on, and it’s mostly a matter of personal choice.

Physically, the Kindle Fire is nondescript, but not unattractively so. It’s just a black square. Perhaps a little chunky, but a comfortable size for carting around, for sure. If you’re thinking “what could be the difference between a 7-inch tablet and a 9.7-incher like the iPad, really?” just hold one in your hands. It is significantly smaller, which is better for some things (like reading books) and worse for others (like web browsing or reading magazines).

I realize now that I completely skipped over any discussion of the Fire’s user interface — and with good reason. I didn’t even have to think about how to use the Fire; I just kinda…used it. The custom skin Amazon has built over Android is as akin to browsing flesh-and-blood books, discs, and magazines as any I’ve ever seen. Everything is organized on faux-wooden shelves, as you can see in the top picture. What I was looking at last is on top of the pile — just as it is on my desk or the floor in front of the nightstand — and my faves are never far out of reach.

On the homescreen lie two shelves. The first and largest, which Amazon calls the “carousel,” is a chronological list of the last places you’ve been, be they Web pages, books, movies, or tunes. Below that, you pin your favorites (a long press on an item on the carousel offers the option to save things on one of these “shelves”). These can be anything, so I chose my current earworm album, a Prime streaming series I’m working my way through, a book I’ve been plugging away at, Popular Science, and the New York Times. 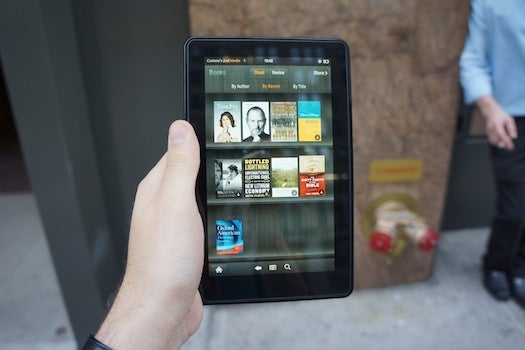 The one real nod the Fire gives to its Android base is Amazon’s App Store, a sort of curated alternative to the regular Android Market. Though limited, the selection of apps in the Store is tested and selectively chosen, so that means there’s zero crap. Even here, though, there’s very little thinking involved; apps I’d already downloaded on my Android phone appeared in the Apps tab, ready to be installed and run. But using it hardly feels like Android — there’s no trademark pull-down notifications windowshade from the top, no home/menu/search/back buttons, and overall it does not behave like Android.

Along those lines, the Fire also refuses to lean on Android’s browser. Here, Amazon has made a lot of hullabaloo. The Fire’s browser, Amazon Silk, relies as heavily on the cloud as the rest of the device does. When you make a page request in Silk, Amazon Web Services (their cloud server) caches all the elements of the page and sends the Fire a single packet of information. Typical mobile browsers compose pages bit by bit themselves. That means the Fire is quick to browse — in theory, at least, and sort of in practice. Page loads certainly felt faster than on other Android tablets, but by no stretch did it challenge an iPad’s speed.

Amazon, though, claims Silk will only get faster: as users browse, the servers learn what pages are likely to be viewed and when. So if we all (more often than not) go from the PopSci.com homepage directly to the story in the top spot, Silk will already be loading the top story before you’ve even thought to click on it.

We’re told the Fire has a dual-core processor, but sometimes when browsing through the library it didn’t quite feel that way. The transition in and out of a piece of content — a book, TV show, an app — felt a bit jerky at times, as did spooling through the carousel. And now and again it needs a little extra-hard second tap to realize “hey yeah, she wants to read that, I guess?” Even worse is that jerkiness shows itself when it’s least wanted: while reading a book. What exactly about turning pages is too much for a dual-core processor to handle smoothly and naturally?

Speaking of frustration: do you use physical volume keys on your smartphone, iPod, iPad, or assorted other gadgets? Thought so. Me too. You’re out of luck on the Fire. Not having a quick toggle to tick up the audio on a loud subway car or to drown out the neighbor’s horrific house music is a simple thing that’ll surely make you insane. And the lack of a “home” button is downright ridiculous. Imagine you start playing Angry Birds on the subway. The theme song blares, and you scramble to mute it. On any other device: press the “down” volume button. On the Fire: tap the bottom of the screen to bring up the menu, then tap the “settings” button, then tap the “volume” button, then adjust the slider. It’s kind of ridiculous. 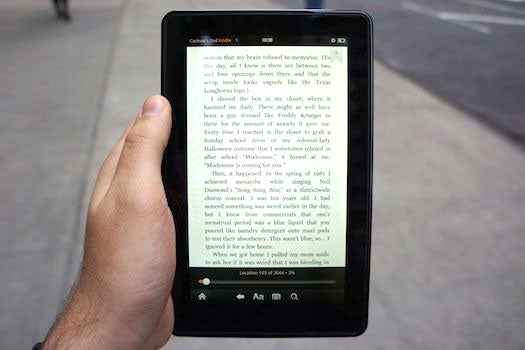 You’ll notice that, save for a quick shout-out to PopSci, I haven’t said a word about magazines on the Fire until now. Because reading a magazine on the Fire is a pretty sad experience. Yes, the catalog is extensive and Conde Nast will try to tempt you with three free months of Details and Brides, but they’re just PDFs. PDFs that aren’t appropriately sized for the Fire’s 7-inch screen. Pages fit the width, but not the height, so the text is teeny; zooming in makes things a little larger, but scrolling through stories and columns of text is still impossibly annoying. You don’t get that “future of magazines” feeling you get while swiping through such stellar examples as Popular Science on the iPad.

A very cheap $200. Amazon is actually taking a loss on each of these sold, so we can hardly accuse the price of not being fair.

If you’re already bought into the Amazon world, which in the Internet age it’s hard not to be, and aren’t full-force into iOS, the Fire is hard to pass up. It’s no iPad, of course, but that’s not necessarily a flaw. The Fire does what is says it will, and for the most part it does it quite well. It’s instant gratification for nearly any media whim. If there’s one thing Amazon knows, it’s how to get people what they want, and get it there fast. The Fire, friends, is the perfect portal.