Android Gets a Makeover With Ice Cream Sandwich 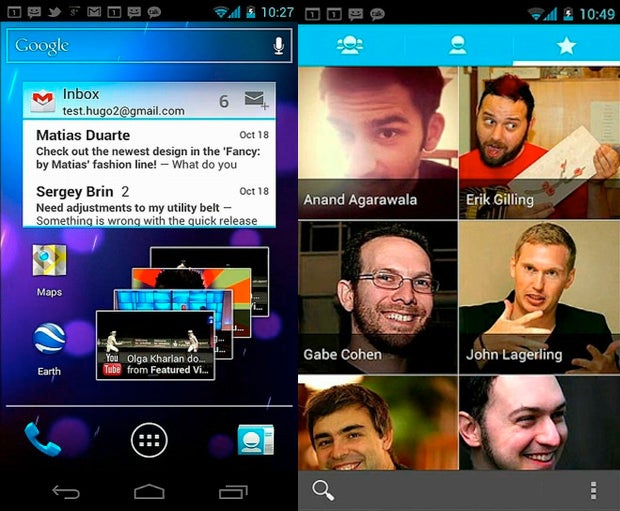 On the left is the new homescreen, with the new resizable, scrollable widgets from Honeycomb. On the right is the new "People" app, showing your contacts in big, pretty, Windows-Phone-like boxes. Google
SHARE

Last night, Google introduced the newest version of Android, to be called Ice Cream Sandwich. It’s easily the biggest update to Android in years, combining elements of the tablet-only Honeycomb with a whole bunch of new ideas, and a firm focus on cohesion–a major complaint about Android. Google also showed off the new Samsung-made Nexus flagship phone, and it is a monster: a 4.65-inch screen in full 720p resolution, and no buttons at all.

Ice Cream Sandwich–Google names its Android versions alphabetically after desserts, so ICS follows Honeycomb, Gingerbread, and Froyo–is, as promised, a melding of the tablet-only Honeycomb into the smartphone versions. To that end, Google has gotten rid of the traditional back, menu, home, and search buttons: in ICS, those will be dynamic and on the display itself, so they can change to suit your needs at that moment. The overall look of the OS is much more flat and stark than before, a little like Microsoft’s Windows Phone but with a blue tint.

Other major changes: there’s a new font (this is a bigger deal than you think), a new browser that syncs with your computer’s Chrome browser and Instapaper-like offline reading, a camera Google promises takes pictures instantly, new editing abilities for both stills and videos, and a magazine-style “People” app that shows your contacts at their prettiest. The notifications and multitasking have also been completely redone, and they look oddly like those of WebOS, the recently deceased mobile OS by Palm–not too surprising, actually, given that they were designed by Matias Duarte, one of the creators of WebOS. Running apps show up in a vertical list. Tapping them takes you into the app, or swiping them horizontally closes them. That same swiping action dismisses notifications from the pull-down notification shade.

That’s not even to mention all the little features buried in Android, including some very cool ones like a facial recognition unlocker that unlocks your phone simply by looking at it, or a built-in barometer (!) in addition to the standard accelerometer and GPS. Or the continuing push for NFC.

As they always have, Google also showed off a new “Nexus” phone, the first phone to pack the new operating system, and the one that’s supposed to set the pace for this generation of Android phones. This time it’s the Samsung-made Galaxy Nexus. It’s got a full HD screen, meaning 1280 by 720 pixels. That’s legit HD, not “looks HD,” not marketing speak. Admittedly, those pixels have a lot of room to breathe, since the Galaxy Nexus has a frankly ridiculous 4.65-inch screen. That is huge. The iPhone’s got a 3.5-incher, standard Windows Phones and Androids have a 4-inch, and the biggest mainstream phones, like the HTC Thunderbolt, have 4.3-inchers. 4.65 is getting into pocket-stretching territory. The Galaxy Nexus will be the first phone to have ICS, and rumors suggest it’ll come out on Verizon sometime in November, possibly at a $300 price point.