$80 Kindle Review: Worth the Price and Then Some

The cheapest Kindle ever delivers a satisfying reading experience 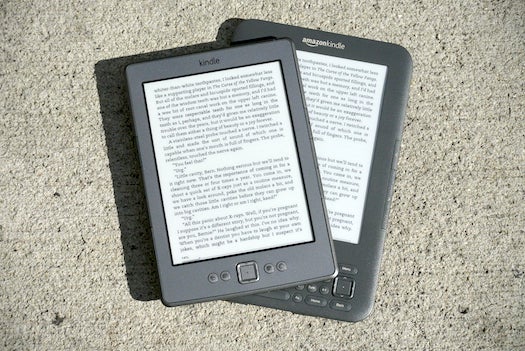 Take the 3rd-generation Kindle, probably the best ebook reader ever made. Chop off the keyboard, trim the sides a bit, rearrange the buttons. Sell for eighty bucks. Correction: sell about a billion of these things for eighty bucks each.

The new Kindle is the cheapest and most barebones of the new family of three Kindles, joining the Kindle Touch (basically one of these, but with a touchscreen) and the Kindle Fire tablet. (The latter two won’t come out until November.) Comparing it to the last-gen Kindle, it loses the QWERTY keyboard, as well as about an inch of height and a centimeter of width. And it gets a new price, the first to drop below $100 (though the last-gen non-3G Kindle, with ads, also got a price cut, from $114 to $100). 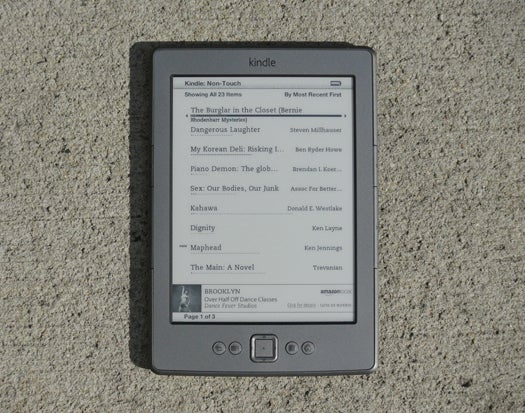 The main page of the new Kindle. Note the ad banner at the bottom.

This is basically the same Kindle experience we’re used to–the best and most comprehensive ebook service out there. You get access to the same bookstore, you get the same fantastic E-Ink Pearl screen (with slightly faster refreshes), the same seamless syncing between devices. The size is nice–it’s not like the last-gen Kindle was too big, but smaller is always nice, and the inch or so of height and centimeter or so of width moves the Kindle into back-pocket territory. That price makes it basically a stocking stuffer, and an awesome one at that.

This is the first Kindle that’s not as good as the one it replaces. The page forward/back buttons, the most-used buttons on a Kindle, have moved from the screen bezel to the sides of the device, which is a little more awkward, and feel a little mushier. The Kindle is smaller than its predecessor, and the loss in height makes it feel slightly more awkward and precarious to hold. It loses the little hook that allows it to clip into a case, so some cases (like the one Amazon included with my review unit) involve a lot of prying and smushing to insert/remove. It’s only available in a Wi-Fi model–no free 3G for this Kindle, so you’ll have to be in a Wi-Fi hotspot (or, you know, at home) to get new books or sync your progress.

Oh, and the screen might be the same, but it works a little differently. Rather than doing a full refresh with every page turn (on previous Kindles, that’s the “blink to black” that happens when you turn a page), the new Kindle does a full refresh only once every five or so pages. That gives slightly faster page turns, but it also produces a ghosting effect–it’s like a white echo of the previous page’s words, visible on the current. The ghosting disappears with each full refresh. We don’t like the ghosting, but some might find the quicker page turns worth the tradeoff. 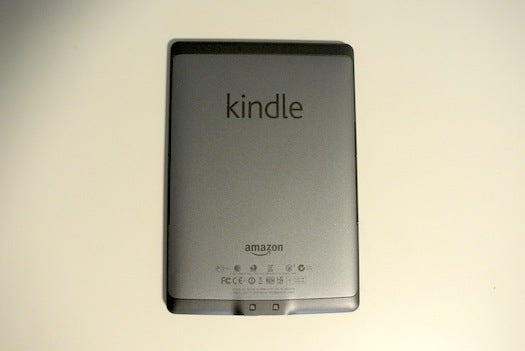 The back of the Kindle looks awesome. The matte, soft-touch, lightly rubbery plastic, the two-tone charcoal/slate, the larger, classy Kindle logo–looks as good as any Kindle ever has.

The $79 Kindle offers a great, inexpensive entry point into the world of Kindle. But we’d recommend spending a little bit more, if you can, and especially if you’re buying for yourself: The included Whispernet 3G, which is not available on this Kindle, is one of Amazon’s best ideas, as it offers a completely free (no monthly fee, no signing up, nothing) 3G access so you can download books, browse the internet, and sync your bookmarks, notes, and progress from wherever you are. I actually think the keyboarded Kindle feels better in the hand, size be damned, even though the loss of the keyboard isn’t a big deal, interface-wise. If spending an extra $50 doesn’t freak you out, I’d recommend the 3G keyboarded Kindle instead, which Amazon is still selling as the “Kindle Keyboard”–or you can wait for our reviews of the Kindle Touch and Kindle Fire, to see how they fare. On the other hand, man, this thing is cheap. I can’t think of a single other gadget that costs less than $100 that I’d actually recommend, which makes the new Kindle just about the best Christmas gift out there.