Camera Gear for Capturing the Best Leaves of Autumn

This fall, capturing postcard-worthy images of wide vistas and vibrant scenery doesn’t have to mean lugging a pro kit on... 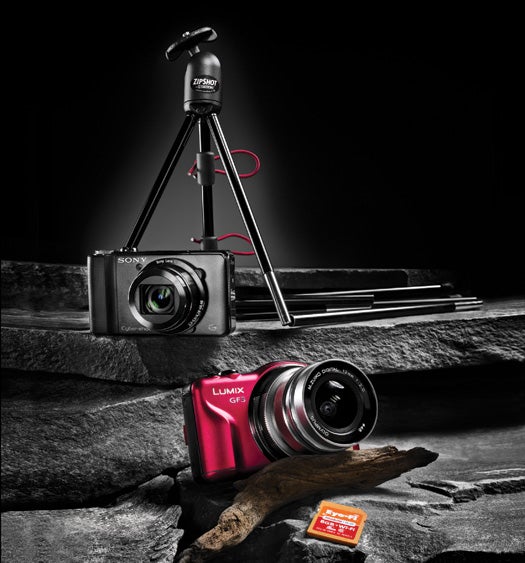 This fall, capturing postcard-worthy images of wide vistas and vibrant scenery doesn’t have to mean lugging a pro kit on your next hike; in fact, quite the opposite. The right camera, tripod, memory card and lens make for more user-friendly shooting and sharing.

Sony’s 16.2-megapixel Cybershot point-and-shoot can capture as much color and light as a DSLR. Sony moved the camera’s transistors behind the image sensor, creating what’s called a backlit CMOS sensor, so those parts won’t block light from flowing in.
Sony Cybershot DSC-HX9V, $350

The ZipShot Mini is the only self-assembling tripod around. Release its ties, and the compact, nine-ounce tripod’s bungee cords snap its aluminum poles together like those on a pop-up tent.
Tamrac ZipShot Mini, $40

The 7.8 ounce, 12.1-megapixel Panasonic Lumix DMC-GF3 has the functionality of a DSLR but comes in a smaller, lighter package. The mirrorless, interchangeable-lens camera is speedy enough to crisply capture moving leaves because its image processor crunches photo data twice as fast as the previous model did, helping cut autofocus down to a tenth of a second.
Panasonic Lumix DMC-GF3, $500

Panoramas call for a wide lens, and low-light shots of sunsets require a large aperture to capture enough light for a good image. Olympus’s new 12-millimeter with a wide-opening iris (f2.0) has both. In addition, the lens’s motors are fine-tuned to keep up with even the fastest-focusing cameras, including the Lumix GF3.
Olympus M. Zuiko Digital ED 12mm f2.0 Lens, $800

Eye-Fi’s SD card creates its own Wi-Fi network so you can instantly share photos through your smartphone. When connected to its dedicated app, the card sends images to iDevices or Android phones and, depending on your settings, can upload them to Facebook and Flickr too. We reviewed the Eye-Fi’s Direct Mode already–check it out here.
Eye-Fi Mobile X2, From $79