There may be iPads in cockpits, but there will soon be Androids among us, the passengers. Boeing has announced that... 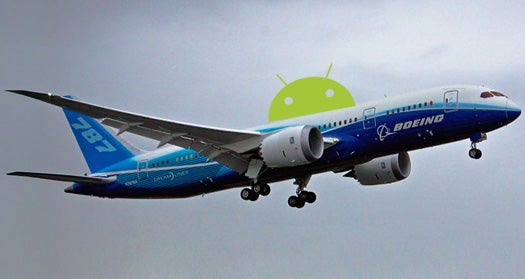 There may be iPads in cockpits, but there will soon be Androids among us, the passengers. Boeing has announced that all of its 787 Dreamliner planes currently in production are being outfitted with Android servers and touchscreens.

We don’t know much about the software that the Android-based system will run, but we do know that the new screens will be generally superior–with a wider viewing angle and less reflectivity–than what passengers are used to, and that they’ll range in size from seven to 17 inches. Airlines wishing to purchase the Dreamliner will only be able to choose between Panasonic and Thales to manufacture their entertainment systems, as opposed to the unlimited options they have on other Boeing aircraft.

The first 787-certified Android touchscreen has already been built by Panasonic, for both economy and first-class seats. According to Boeing’s technical manager, though, many of the new Android screens for business and first-class will be gesture instead of touch-based, because passengers who actually have leg room won’t be able to reach the screens. Android has already been certified to run the major streaming services (Netflix, Hulu, and the assorted music services) and has the ability to play back external files from USB drives, so the Dreamliner definitely has the potential to bring some pretty great media possibilities to the schmancy new plane.