Sony announced a pair of new DSLRs in their Alpha line today, named the A77 and A65. As our sister... 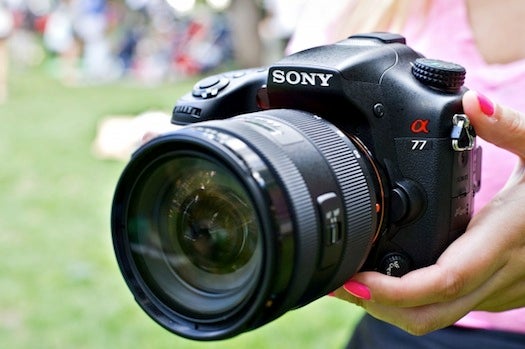 Sony announced a pair of new DSLRs in their Alpha line today, named the A77 and A65. As our sister publication Pop Photo awarded Sony’s A55 the camera of the year award in 2010, we sit up and take notice whenever Sony releases a new flagship DSLR–and we’re glad we did this time, because good lord, these are some impressive cameras.

Both are outfitted with the newest version of Sony’s Translucent Mirror tech, basically an entirely new type of camera that our counterparts at Pop Photo absolutely love. You can read a longer description of that tech and why it’s amazing here, but essentially the idea is that by using a translucent reflex mirror (rather than one that must be flipped up and away when switching to video mode), Sony’s cameras enable legitimate autofocus for video. The higher-end A77 boasts the newest version of the Translucent Mirror, which gives it the world’s fastest continuous autofocus shooting, capturing full-rez images (and at 24-megapixels, these are massive ones) at 12 frames per second (the A65 gets 10fps).

The viewfinder, another major strength of Sony’s latest Alpha cameras, also gets an upgrade–this time to a high-resolution OLED. Instead of using an optical viewfinder, these digital ones allow all kinds of tweaking and overlays of settings, so you don’t have to withdraw your eye and mess around on the camera’s LCD to quickly change your aperture or white balance.

A surprising amount of the tech in the Alphas gets carried over to Sony’s new interchangeable-lens compact, the NEX-7, the predecessor of which we ranked one of the best cameras of last year. It’s got the same 24.3-megapixel sensor and same processor as the big boys, for example. Read more about it here.

You can read more about the NEX-7, A77, and A65 over at Pop Photo–and see a gallery of images taken with them, as those lucky photogs have been playing around with these cameras for a good few days now. The A77 will retail for $1,400, and the A65 for $900, with just the body–no lenses included. The NEX-7 will run for $600, body-only.