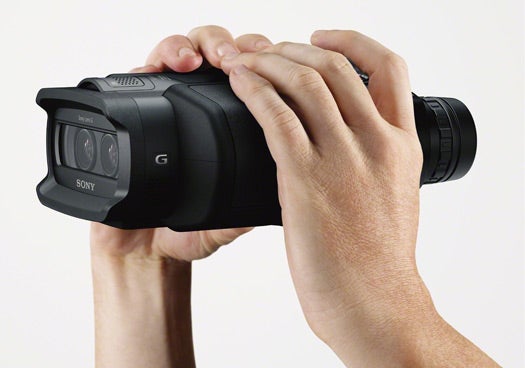 Digital recording binoculars aren’t really new–there are some cheapie versions available–but Sony’s new DEV-3 and DEV-5 binoculars lift that humble tech into some really impressive new places. Instead of taking a regular set of binoculars and cramming a cheap video recording device into them, Sony took its high-end HD camcorders and molded them into the shape of binoculars. That means they can both record in 720p (high-def) and in 3-D–these might be the perfect tools for birdwatchers and other nature-types (as opposed to snipers).

What’s interesting here is that these binoculars are essentially not one but two of Sony’s G-Lens optics systems, the same ones found in the company’s HandyCam camcorders and CyberShot cameras. That makes shooting in 3-D incredibly easy, since the two separate lenses make it naturally stereoscopic–and naturally in full HD. They can, of course, shoot both 2-D and 3-D, as well as take 7MP still photos.

The binoculars both boast 10x optical zooms (in 2-D; in 3-D, they can both manage 5.4x), but the DEV-5, the more advanced of the two (bigger number equals better binoculars!), also offers a 20x digital zoom. Sony claims that thanks to image stabilization and autofocus, the DEV-5’s digital zoom avoids some of the problems inherent to digital zoom (like a loss in clarity), and allows shooting in lower light than a bulky and heavy 20x optical zoom would. Still, these seem like some pretty sophisticated sensors: in 2-D, Sony claims that you can focus on an object as close to the binoculars as a mere centimeter away.

The DEV-5 also includes a built-in GPS receiver that can geo-tag your photos and video clips, so you can see exactly where you were when you try to pass off a pileated woodpecker as the probably-extinct Ivory-billed woodpecker, and both binoculars are designed for stealth (no visible shiny buttons, an elastomer coating for grip), so your quarry doesn’t see you perched in a tree or whatever. Battery life is about three and a half hours for 2-D recording, though there will be an extended battery that can bump that to over six hours. It relies on external memory cards (SD or Memory Stick), and has an HDMI-out port so you can show off your videos on an HDTV.