A Shape Shifting Power Tool For All Your Slicing Needs

Over the past five years, 12-volt battery-powered tools have been rapidly replacing their corded counterparts. Among these upgrades, the Rockwell... 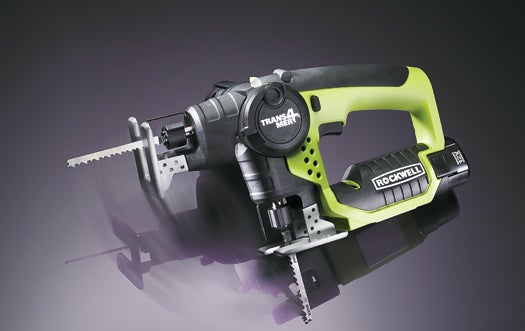 Depending on the head angle, the Trans4mer's cutting edge can swivel 180 degrees. Jeff Harris/Artmix
SHARE

Over the past five years, 12-volt battery-powered tools have been rapidly replacing their corded counterparts. Among these upgrades, the Rockwell Trans4mer merges the portability of a 12 volt with true versatility, combining a jigsaw and a reciprocating saw into one shape-shifting 2.6-pound tool.

Releasing a lever on the main housing frees the blade-baring arm to move into one of six positions, between zero and 90 degrees. Typical saw motors sit behind the blade and use a transmission to get power to the cutting edge; moving this arrangement could force the motor and transmission out of alignment, causing inefficient power transfer and reducing the strength of the cut.

So the Trans4mer’s motor and transmission are located alongside the blade and move with it, allowing the saw to maintain full power in any position, whether downward to make curved cuts like a jigsaw or outward to slice vertically like a reciprocating saw. It can chew through two inch-thick wood, 1.75-inch-thick aluminum or even 0.2-inch steel. Not bad for 12 volts.