Today at E3, Microsoft kicked things off with a keynote that was heavily Kinect-focused, as we hoped it’d be. Even... 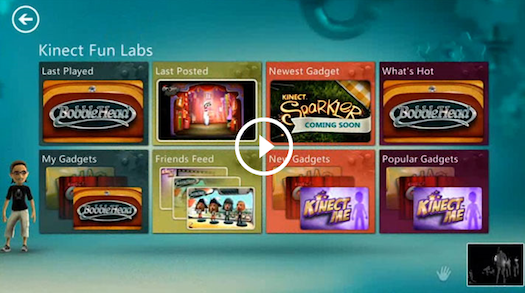 Today at E3, Microsoft kicked things off with a keynote that was heavily Kinect-focused, as we hoped it’d be. Even better, the keynote addressed lots of the things I whined about in my last Grouse column, especially the need for an app store, better voice control, and more games. Kinect’s looking good for the future–here’s what’s coming up.

Side-stepping the whole semantic battle over the phrase “app store,” Microsoft announced the rough equivalent to one, christening it the Kinect Fun Labs (which kind of sounds like an exhibit in a science museum). Fun Labs will be added to the Xbox Dashboard (basically, what you see when you turn on an Xbox 360) and is designed to show off all kinds of independent and other random apps using the Kinect.

Microsoft demonstrated a few examples at E3–there’s “Kinect Me,” which scans your face and body and creates a startlingly realistic avatar (wearing your clothes!) from it. There’s “Kinect Sparkler,” which lets you draw in the air all around you. And perhaps most exciting is the curiously named “Googly Eyes,” which allows you to scan in a 3-D object and then manipulate it digitally in a game. You can see in the video above that the Kinect scans in both the front and back, so the object looks realistic when bouncing around in a 3-D space in a game. We specifically asked for this feature; Microsoft showed off something like it in an early Kinect demo, and then we never saw it again. But it has a ton of potential, so we’re really pleased to see Microsoft making good on that demo.

Microsoft has been a consistently underrated force in the connected-TV arena; the Xbox 360 is already a powerful and well-designed media connector, and Windows Media Center, which comes free on Windows PCs, is probably the best piece of software Microsoft ever designed that nobody ever used. So we’re not surprised, but we are excited, to find that Microsoft is moving forward with plans to turn the Xbox 360 into a full-on media center. The company barely glanced on Xbox Live TV, but we know that sometime this fall, Microsoft will be adding live TV offerings to the subscription services like Netflix and Hulu Plus that are already available.

We don’t have a full image of what this will look like–will it stream over Wi-Fi? will there be a coaxial or HDMI-in accessory?–but it’ll make Bing search a major part of navigation. In addition to Netflix, Hulu, and MLB, which are already embedded in the Xbox, Microsoft will add YouTube and live TV (somehow). Everything will be able to be controlled via voice command; that’s another thing we asked for, as the current voice commands are sorely limited. But Microsoft says “you no longer have to navigate through the menus to find content,” meaning you’ll be able to search just by talking.

I’m not going to go into too much depth on the games; I’d recommend Kotaku if you want to get some serious gamer talk. But there are some games that look pretty exciting: There’s a Kinect Star Wars game that uses both gesture and voice (you say “lightsaber ON!” and then wield it like the Jedi you wish you were), there are games that let you slash swords, dismantle guns, and cast spells with the wave of a hand, there’ll be Kinect support for all major EA sports games, and there’s a Disneyland game that’ll let you (or, um, small children) hug Mickey Mouse. Fun!

Microsoft may not have addressed absolutely everything in my rant, but they did come pretty close–and left the door open for even more. I wanted face-to-face interaction with characters; Microsoft took a first step towards that, with Googly Eyes. I wanted a thriving app store; Microsoft is inching in that direction with Kinect Fun Labs. What Microsoft showed off today was definitely promising–not perfect, but we can’t expect perfection all at once. Hopefully Kinect Fun Labs, Xbox Live TV, and all those new games will be fun enough that we’ll be able to dust off our Kinects and enjoy them again. (Well, beyond Dance Central 2, at least.)